As an architect specializing in religious design, the story of the design & construction of Saint Fin Barre’s Cathedral is one of my favorites. As one would expect for a site where Christian worship has been offered since the seventh century, the present cathedral – completed in 1879 – replaced a previous Classical style cathedral – completed in 1735 – which replaced an earlier Medieval cathedral. The architect for the present cathedral was selected by means of a design competition.

(Design competitions are still held for new commissions, though not as often for new worship buildings. I have always been reluctant to participate in a design competition for a new or renovated church because I don’t believe that a competition serves the parishioners’ best interests as well as the collaborative approach we typically use when designing worship spaces. Nonetheless, at a point when there was no other work in our office, we did participate in one such competition and our entry was selected. We went on to design the addition and renovations to the Church of the Holy Spirit in Cortlandt Manor, NY. Fortunately, that competition was not like the one you’re about to read about.)

It sounds like the design competition for the new Anglican cathedral in Cork was open to anyone in the world who wanted to submit, as there were a whopping 68 entries! Among the requirements of the competition was that the cost of the building should not exceed £15,000. It seems that William Burges, the architect whose design was selected, did what he had to do to get the job: he fudged the budget.  He conveniently left out the cost of the towers, spires and carving from his estimate so that he could claim that he met the budget requirements. This was William Burges’ first major commission – at the age of 35 –  and it would keep him busy for the rest of his life. His diary records his reaction – “Got Cork!” – while cathedral accounts mention a payment of £100 as prize money. 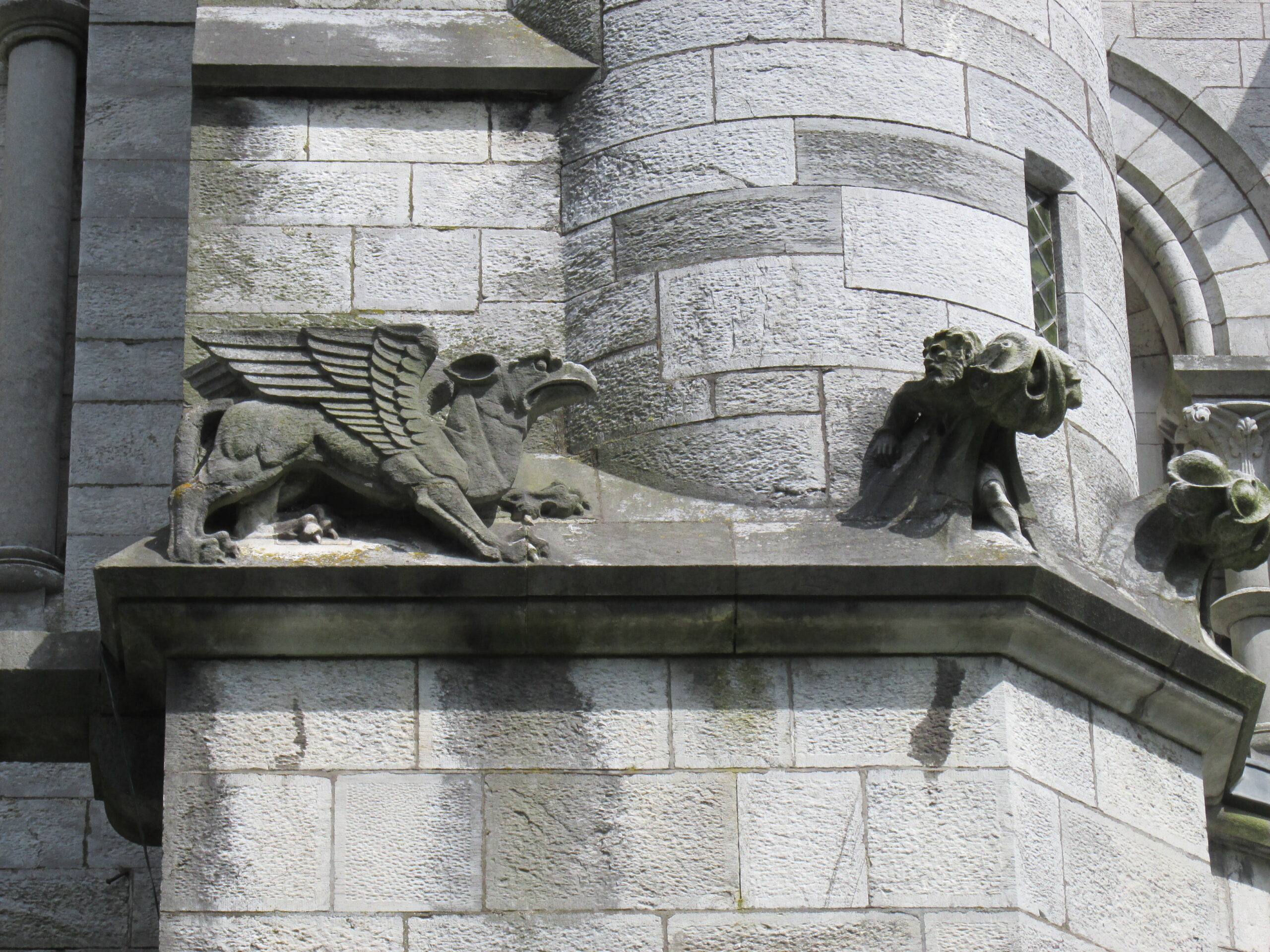 Clearly a man with a vision, he not only designed the cathedral’s architecture, but also most of its sculpture, stained glass, mosaics and interior furniture. (Mindful that the cathedral was unlikely to be finished in his lifetime, Burges produced comprehensive plans for its decoration and furnishing. These plans were used to complete the carving and decoration of the cathedral well into the 20th century, long after Burges’ death in 1881 at age 53.) It is rare to see so much of the interior art created by the same architect who designed the building. The superiority of his design was recognised by the Bishop of Cork, John Gregg, who supported Burges and lobbied for additional funding. The final total was significantly over £100,000. Burges, assured by the efforts of Gregg, was unconcerned. Here’s how he justified the huge cost overrun in an 1877 letter to Bishop Gregg:

[In the future] the whole affair will be on its trial and, the elements of time and cost being forgotten, the result only will be looked at. The great questions will then be, first, is this work beautiful and, secondly, have those to whom it was entrusted, done it with all their heart and all their ability.

Burges designed a three-spired exterior to enhance the size of the building to viewers. Unfortunately, these spires were difficult to build from a technical point of view and thus expensive to fund – adding about £60,000 to the cost of the project. So where did all this extra money come from? It turns out that the Bishop was very good at taking advantage of the competitive nature of the local businesses to raise money. There were two major (and competing) purveyors of alcoholic beverages in Cork – William Crawford of the Crawford brewing family and Francis Wise, a local distiller. He went to one of the two and convinced him to make a major donation to help build one the spires. Once he secured the funding, he went to the other and let him know what his competitor had contributed. Not wanting to be outdone, the second donor matched the first donation, helping to fund construction of another spire. So of the three spires, one is funded by beer and the other by whiskey! 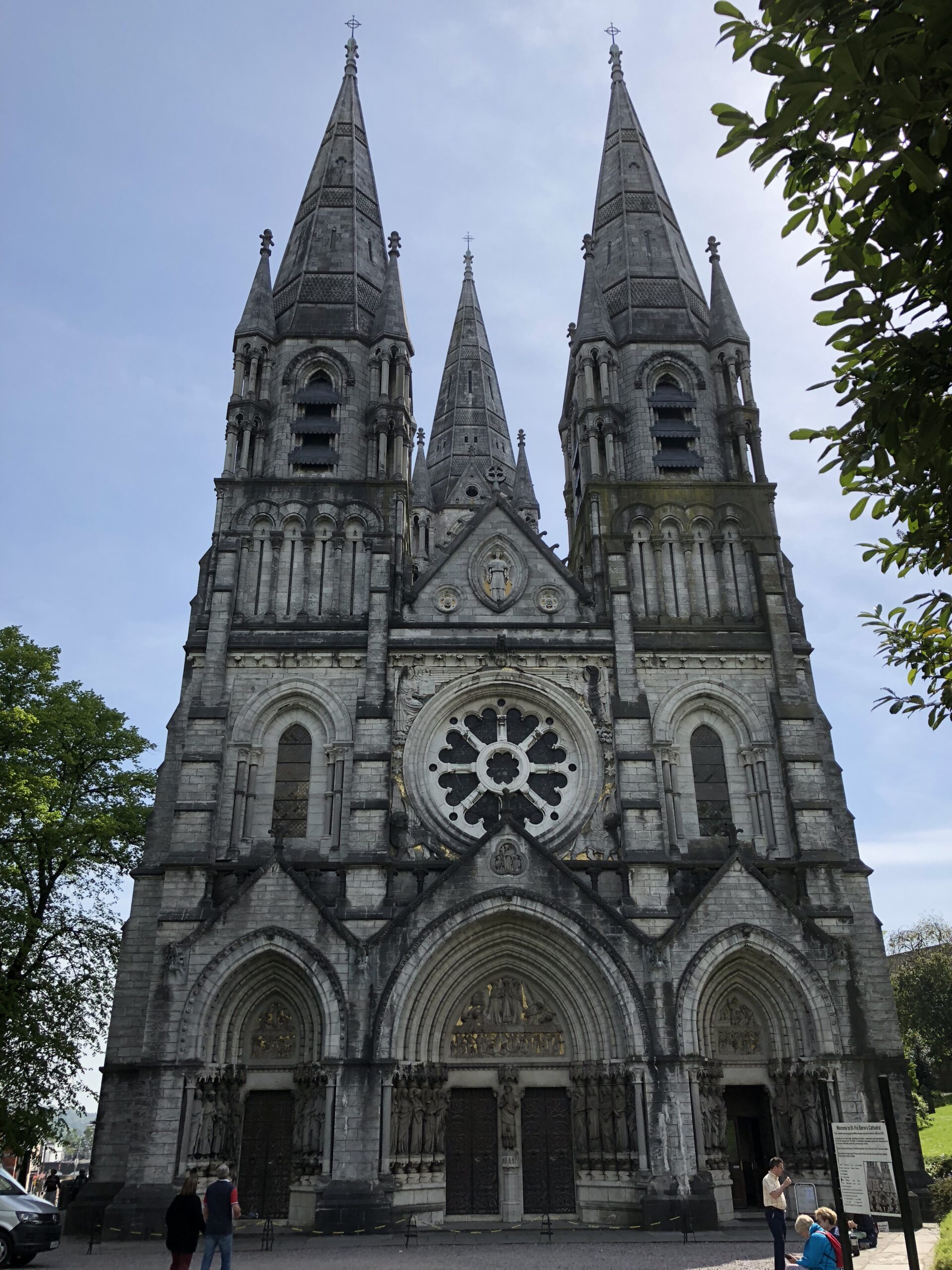 While I found the history of the design and construction fascinating, the building itself was nothing short of spectacular. A major restoration of the cathedral, costing £5,000,000, had been undertaken at the end of the 20th century so the interior and exterior were both in very good condition for a 150-year old structure. I spent quite a bit of time looking over the front facade, with its three entrances, which Burges considered to be the most important exterior feature as it would be lit by the setting sun and thus the most dramatic. Unfortunately, I was there in the morning when it was in shadow. But it was still magnificent! 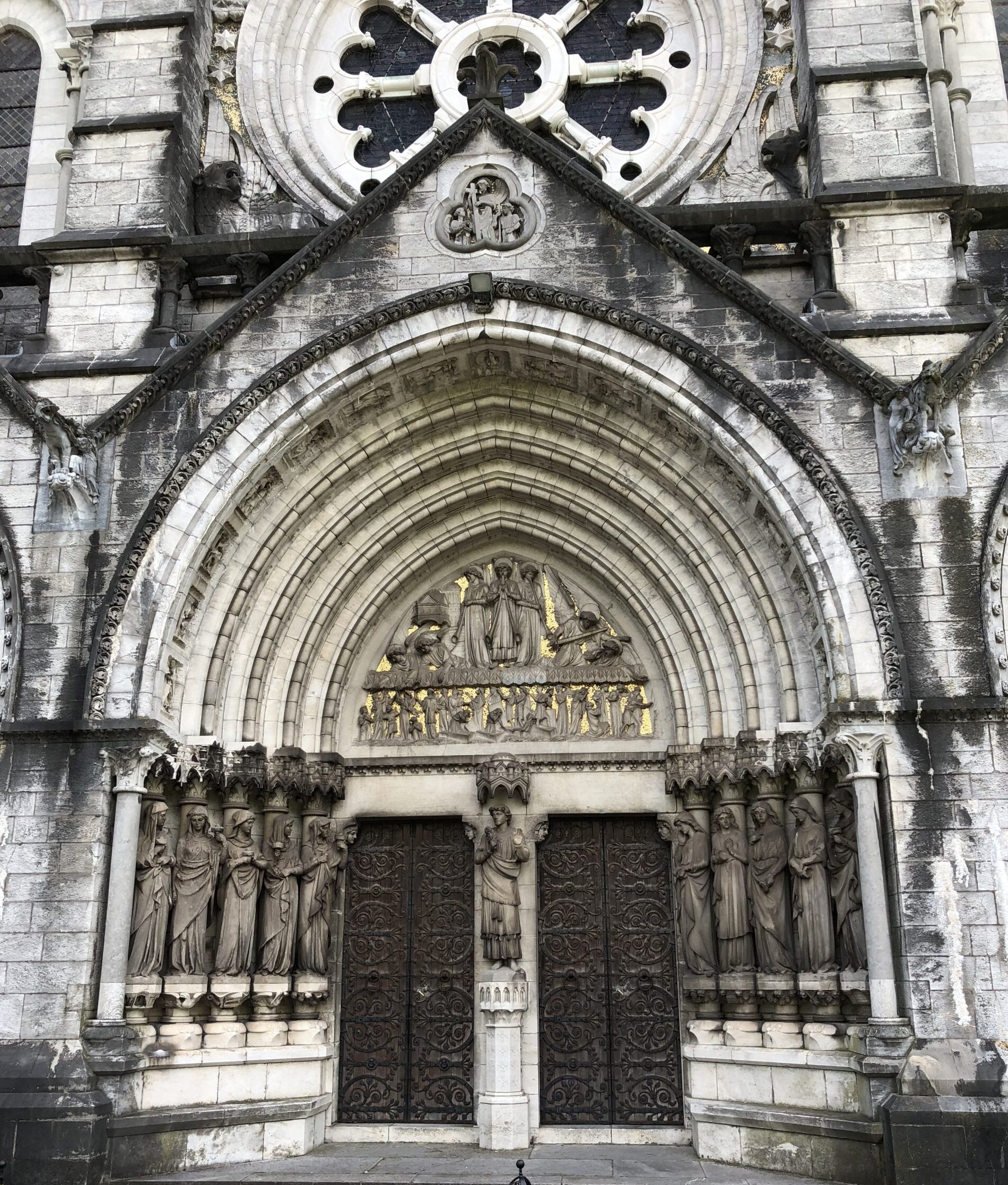 The theme is The Last Judgement, with representations of the twelve Apostles bearing instruments of their martyrdom (4 of whom are pictured below), the Wise and the Foolish Virgins (pictured above), the Resurrection of the Dead and the Beasts of The Evangelists. 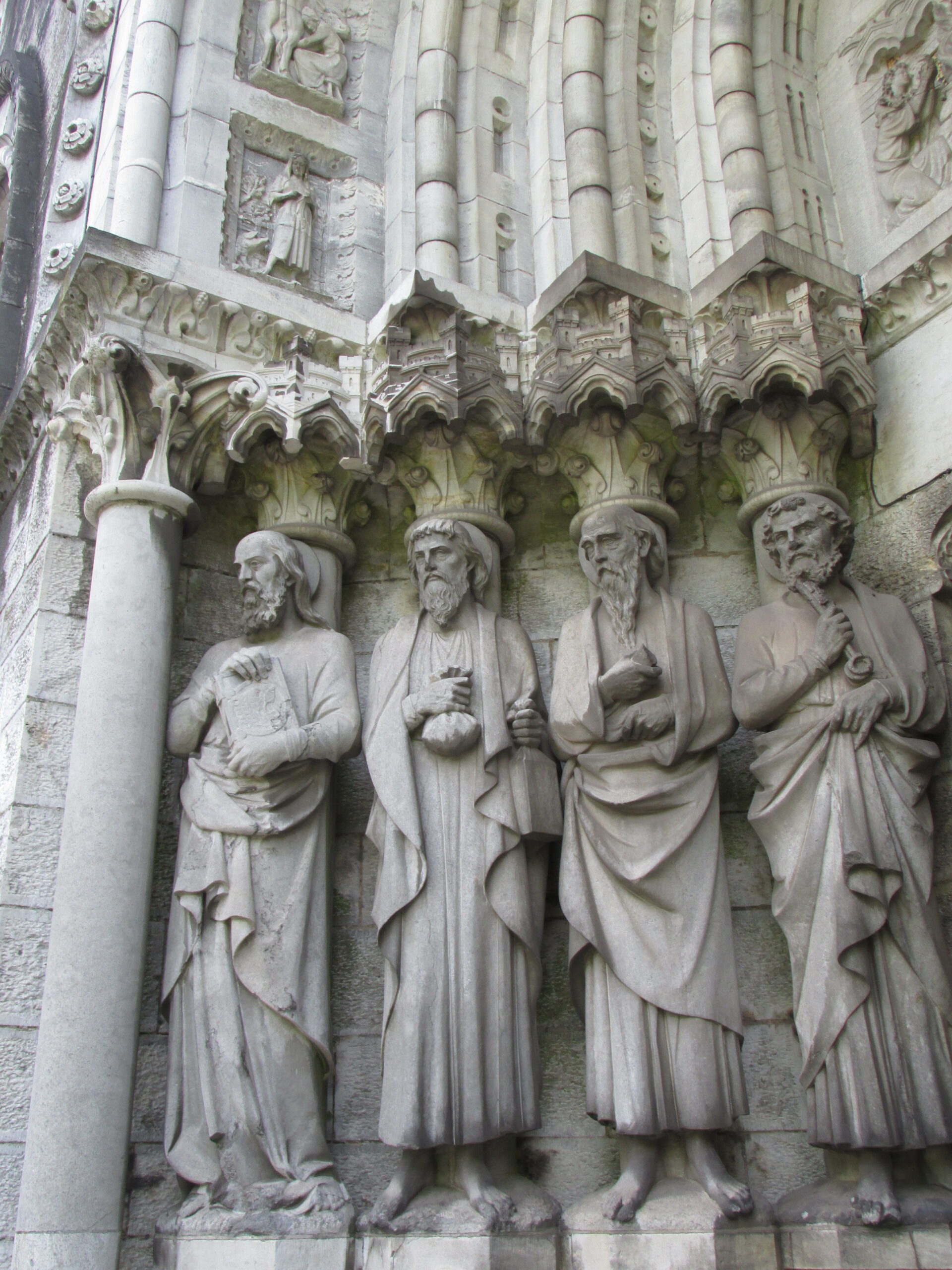 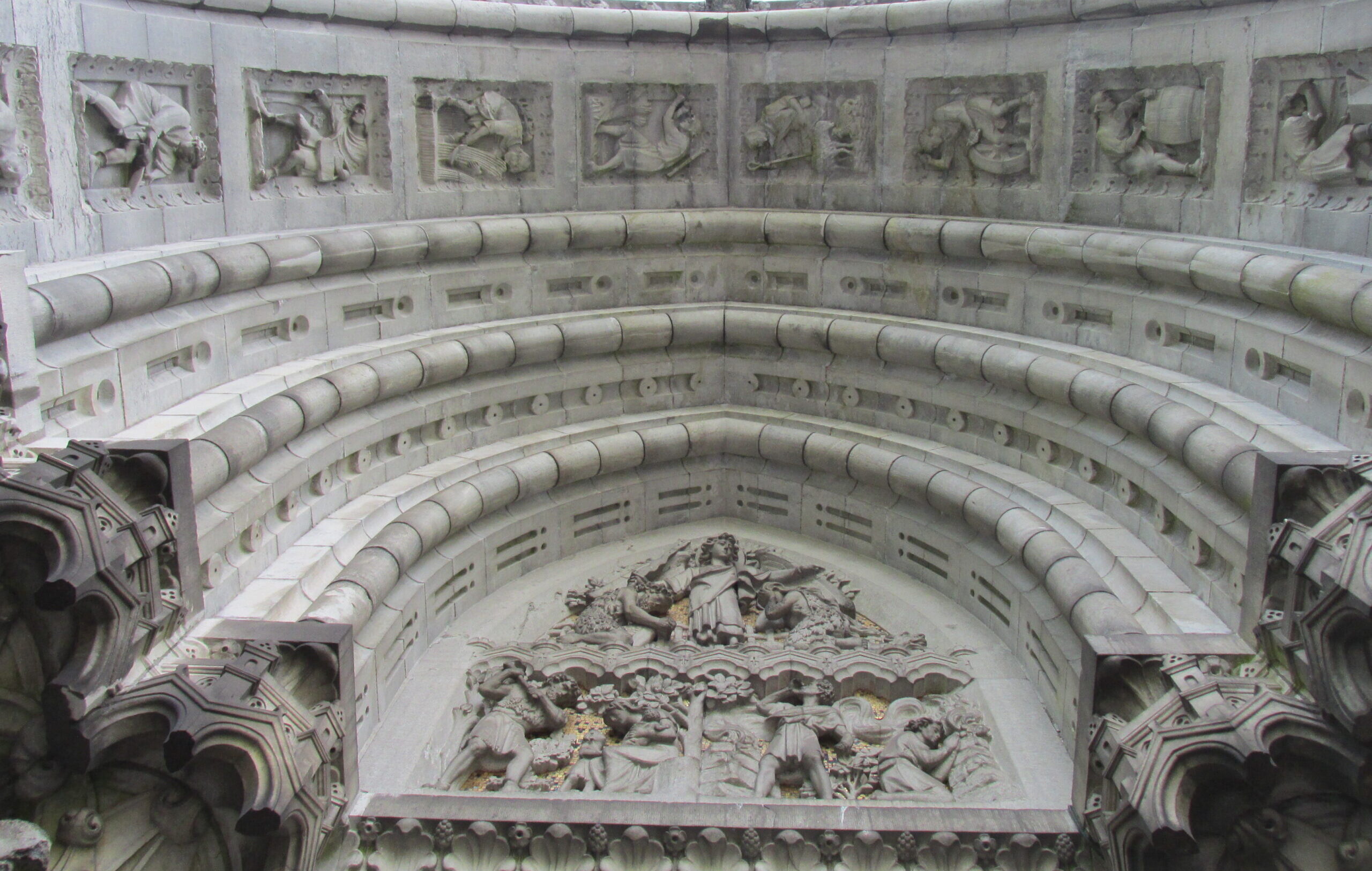 If you look very closely at the rear (east) facade, you will see a gilded angel (locally known as the “goldie angel”) atop one of the roofs. It was designed by Burges and erected in 1870 free of charge as his gift to the city, in recognition of Cork’s willingness to fund his original design, and positioned in place of an intended wrought-iron cross. 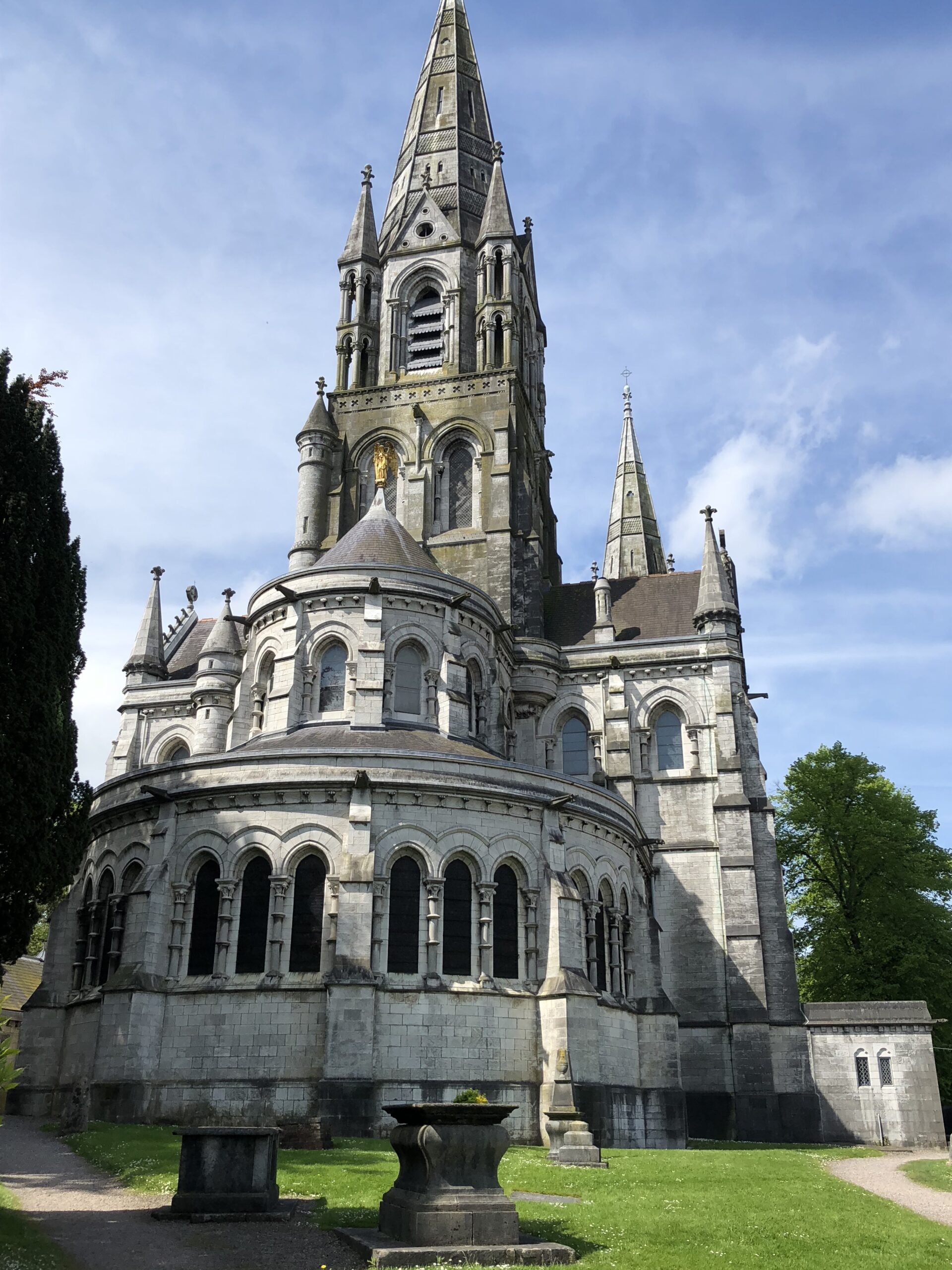 Saint Fin Barre’s is described by the architectural historians David Lawrence and Ann Wilson as “undoubtedly [Burges’] greatest work in ecclesiastical architecture”, with an interior that is “overwhelming and intoxicating”. Turns out that that is a very apt description of the interior. The proportions of the nave are unusually narrow and tall, which tends to lead your eyes up to the exquisitely decorated apse timber ceiling. 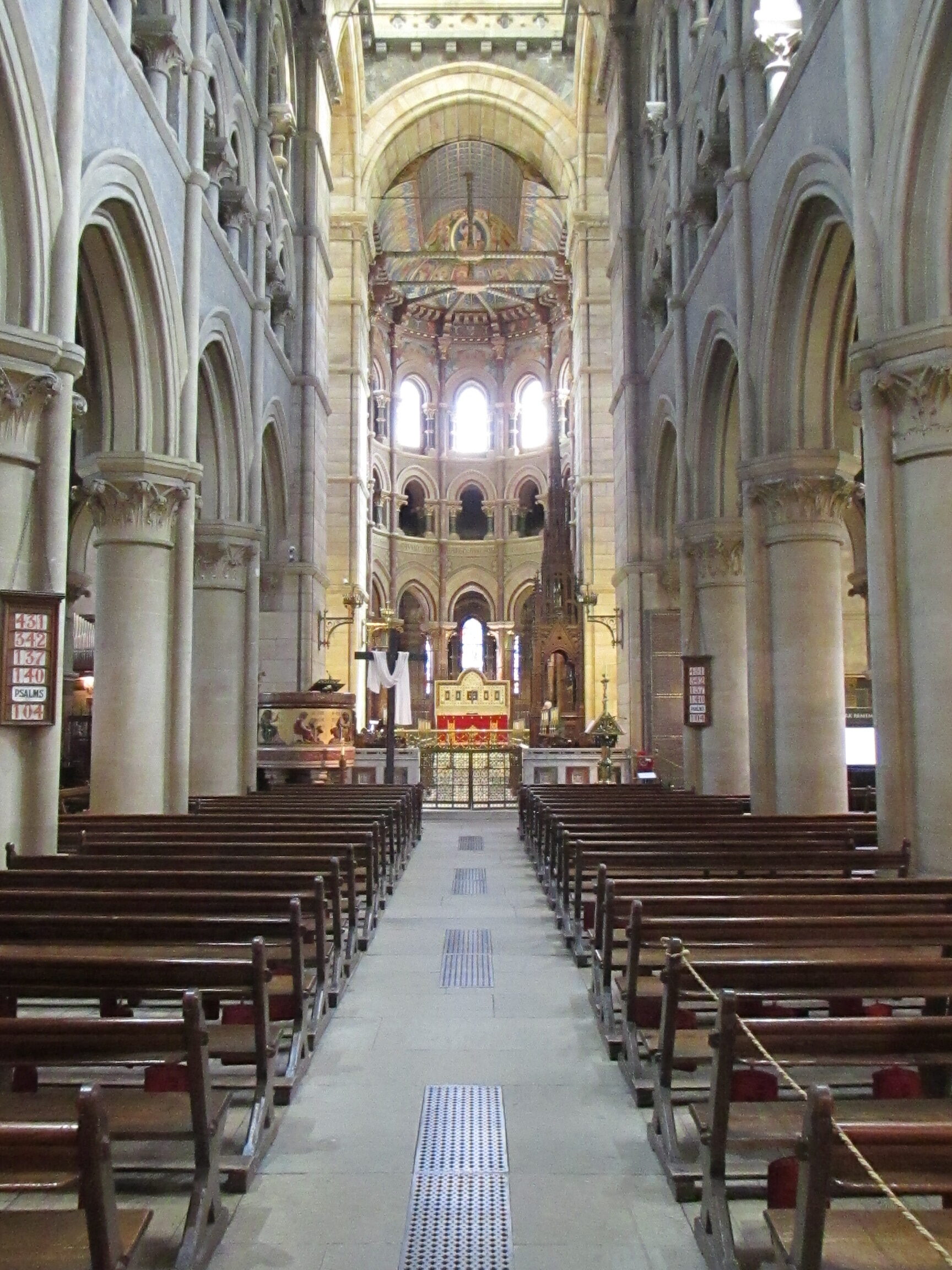 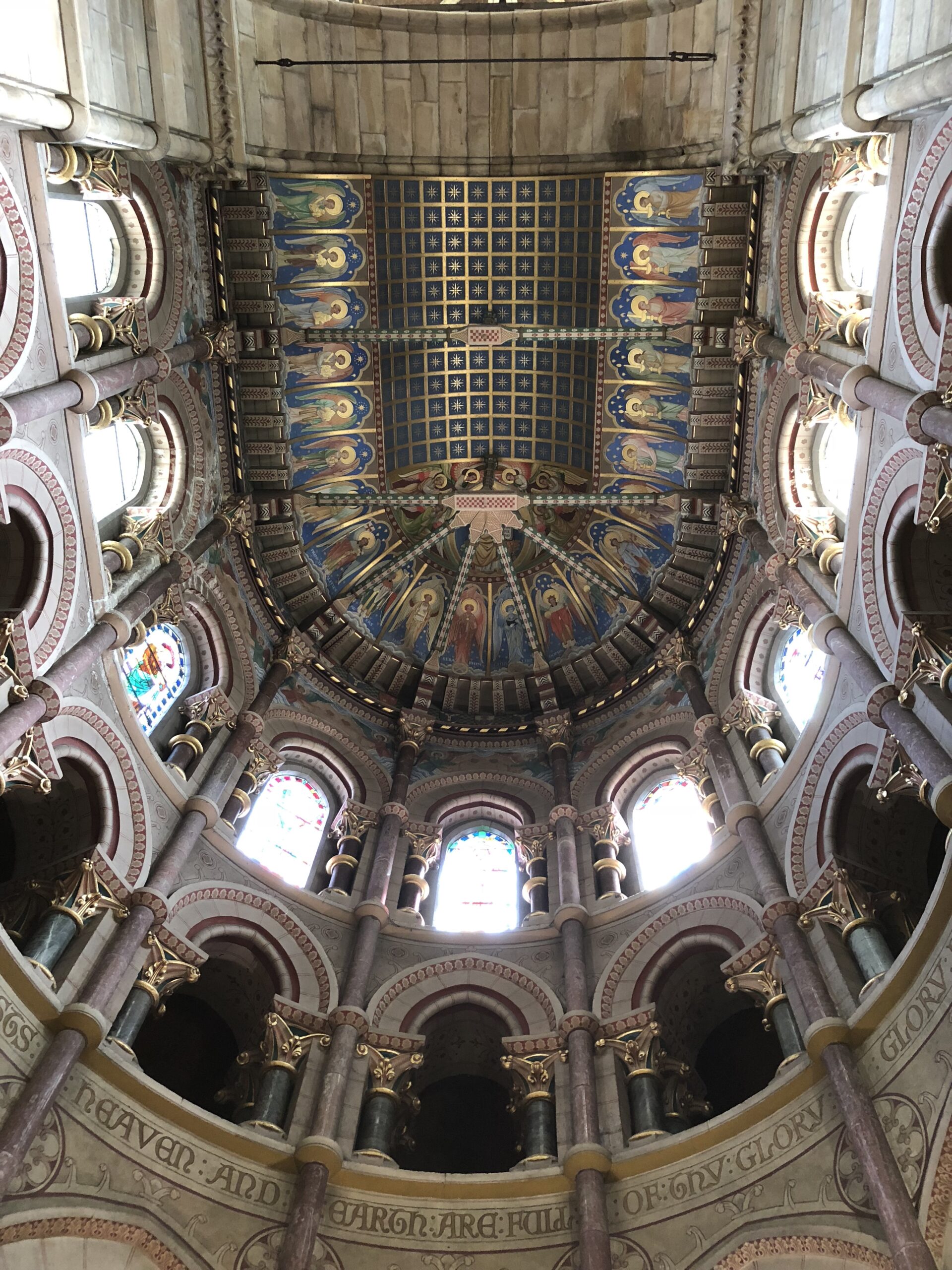 Once in the chancel area, looking down is equally delightful! Created by Italian craftsmen, using marble from the Pyrenees, the mosaics in front of the altar tell the story from St. Matthew that “the kingdom of Heaven is like unto a net that was cast into the sea and gathered of every kind.” 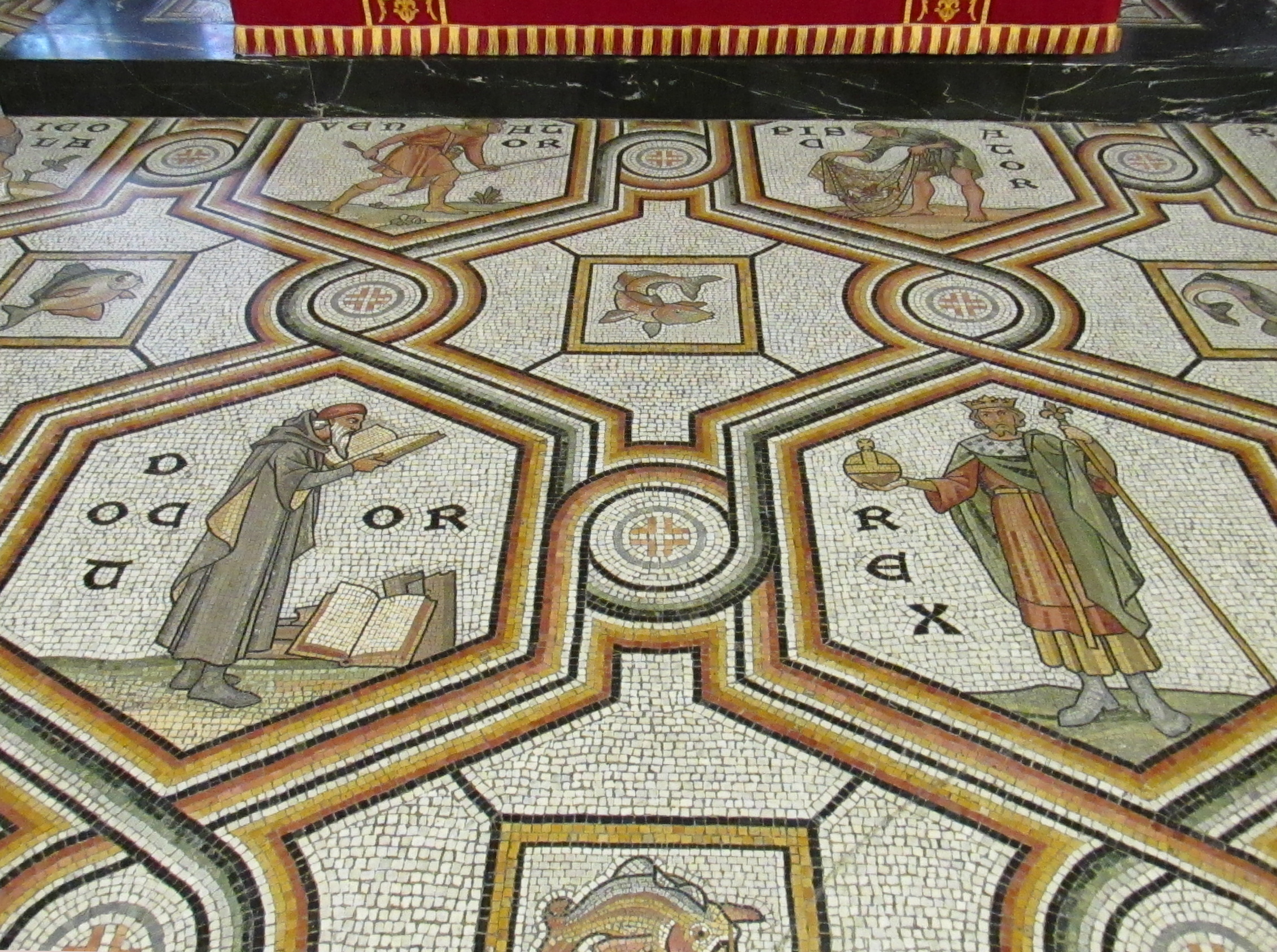 Last but not least are the stained glass windows, for which Burges conceived the iconographical scheme, designed the individual panels for the each of the 74 windows, and oversaw every stage of their production. Below are details from a couple of the more unusual windows. It’s obvious which Bible story the top image depicts but I am still trying to figure out what the bottom one is. If you have any guesses, please post a comment with your suggestions! 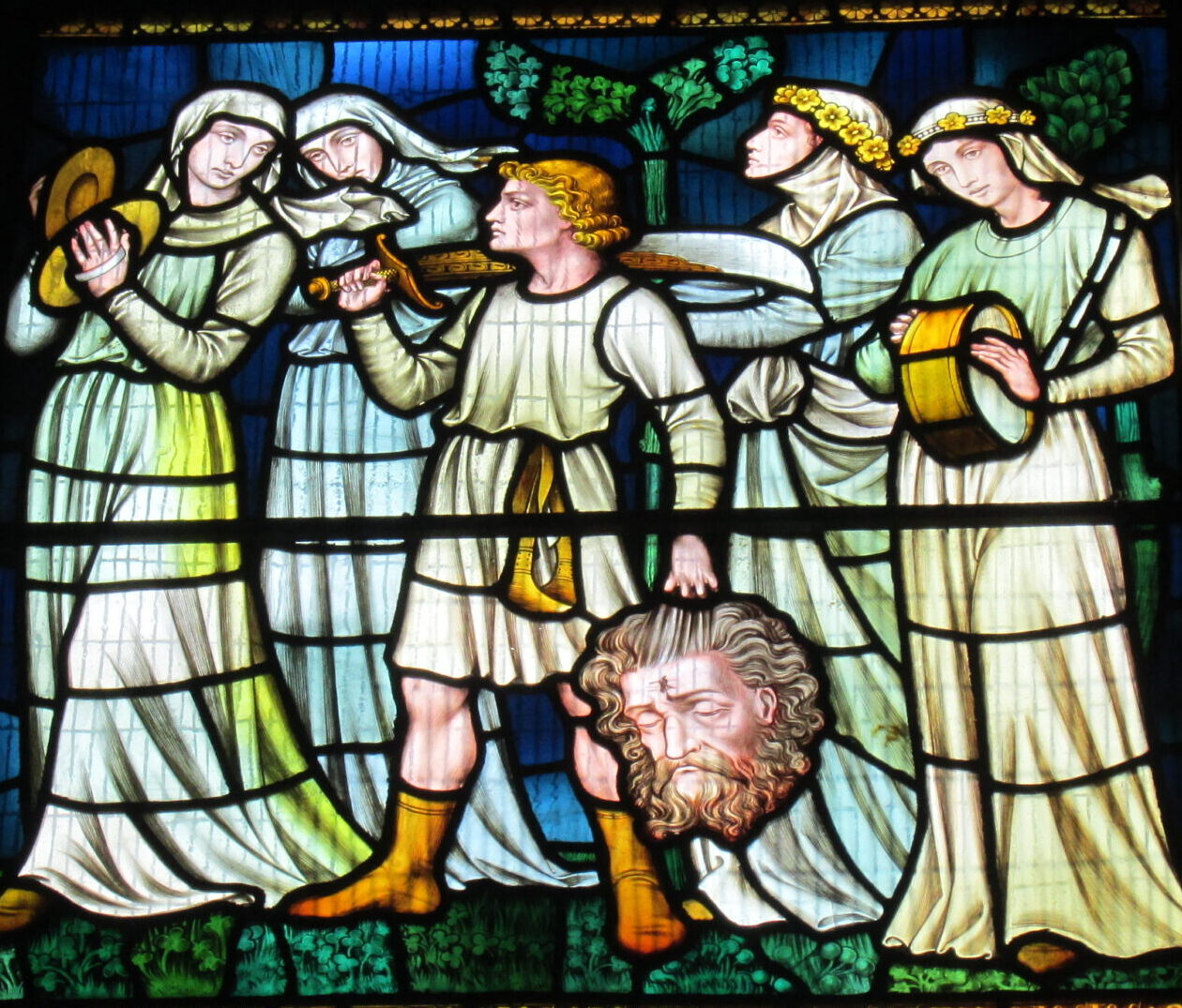 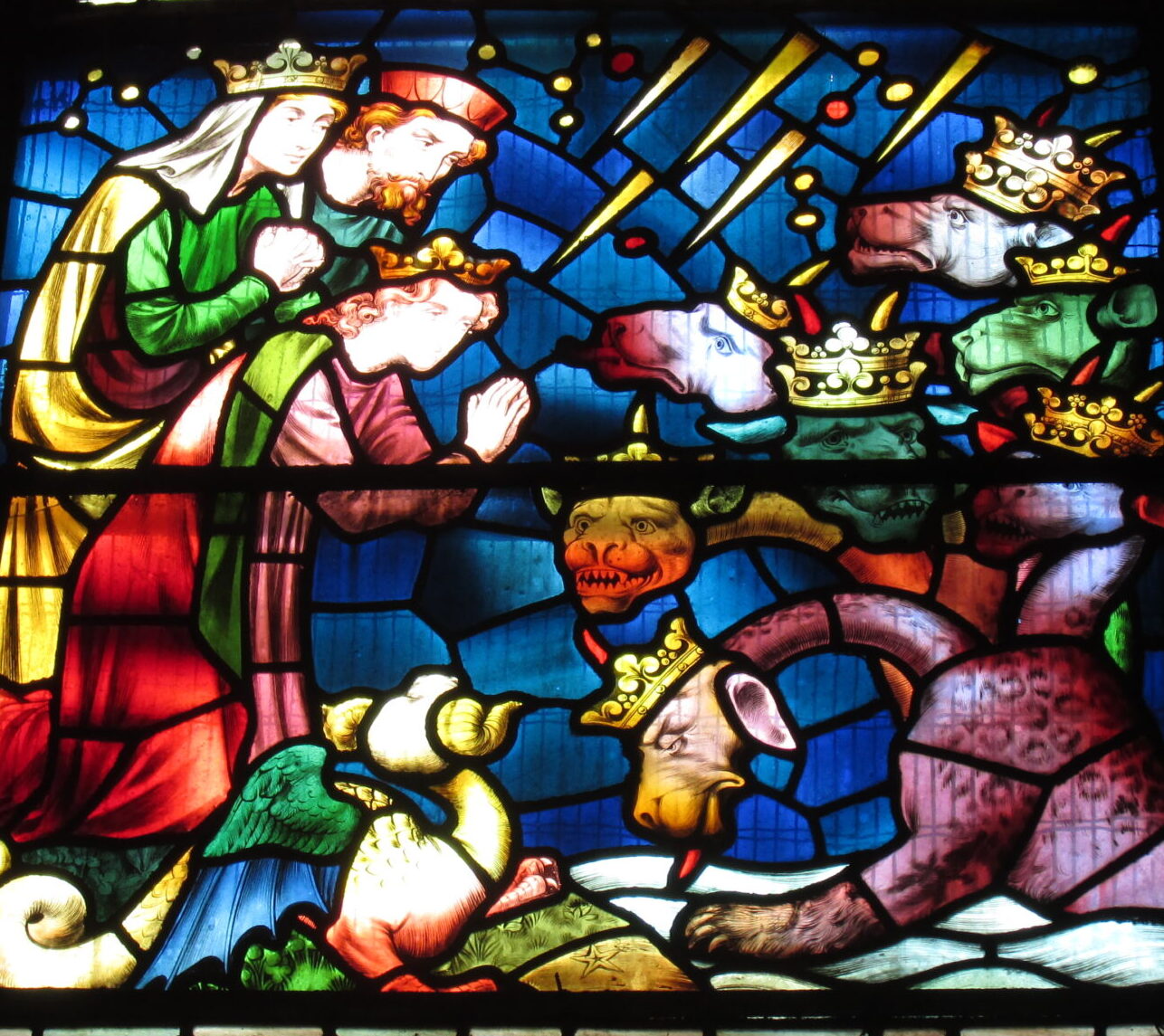