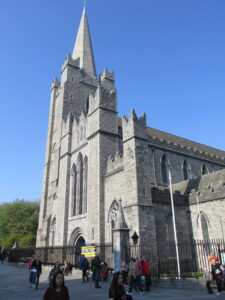 Just as there are two cathedrals in County Cork, there are two cathedrals in Dublin. Except this time, neither one of them is Roman Catholic. St. Patrick’s Cathedral is the National Cathedral of the Church of Ireland while Christ Church Cathedral is the diocesan cathedral for the Diocese of Dublin and Glendalough. According to Rick Steves, both cathedrals underwent extensive renovations in the late 19th century, with one being funded by the Guiness family and the other by the Jameson family. (Sounds just like the story of the towers of Cork Cathedral!) More on that later.

One of the most significant facts about this building is that it was built on the very site where St. Patrick, the man traditionally credited with bringing Christianity to Ireland, baptized people into Christianity circa 450 A.D. Construction on the current building started in 1220 and took 40 years. (If you’re interested in a detailed timeline of the history of St. Patrick’s, I would suggest following the timeline on the cathedral website.) The baptistry is located in the oldest part of the cathedral. It may have been part of the entrance to the church that existed on the site prior to the construction of the cathedral. The vaulting is obviously earlier and cruder than in the rest of the cathedral. The floor tiles are all that have been preserved from medieval times. They were used as models for the new tile floor laid down in 1882. The font is medieval but nothing is known of its origins. Baptisms are now held in the Lady Chapel. 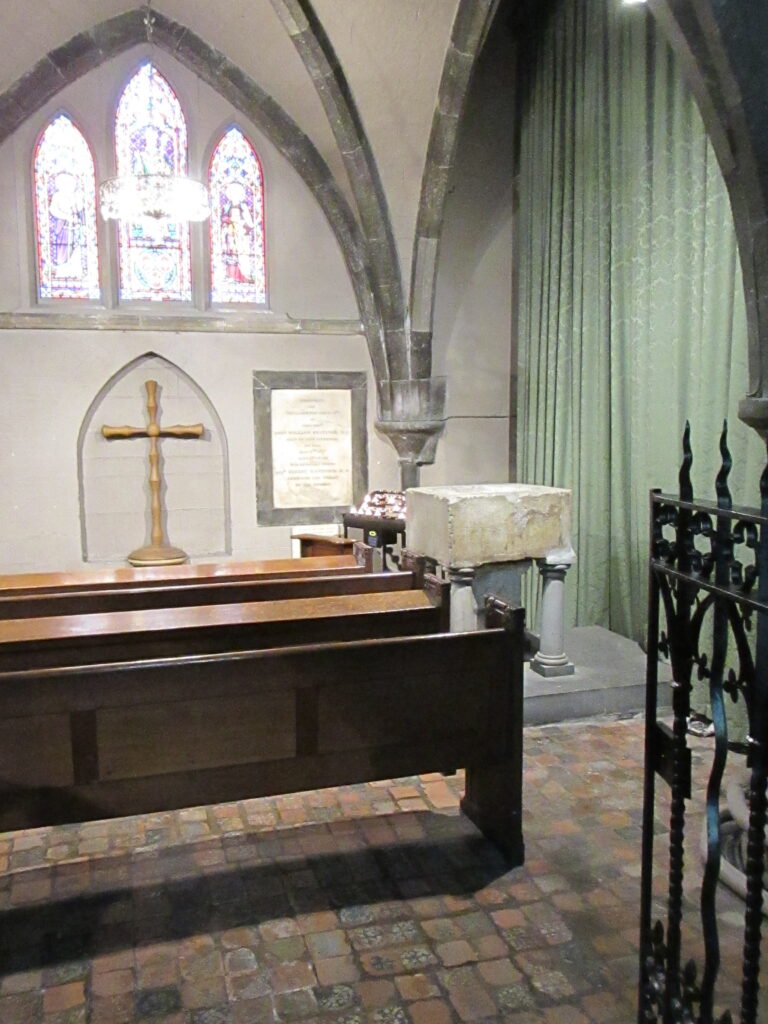 I always advise clients to build in flexibility for the future. St. Patricks Cathedral, whether it was designed to be flexible or not, has had its share of non-liturgical uses. In 1547, it was demoted to the status of a parish church and was subsequently used as a court house and, for a short period, as a university. In 1651 Oliver Cromwell used the Cathedral to hold court martials and according to legend he also stabled his horses in the nave of the building as a gesture of disdain towards the Anglican Church (although this has never been verified). In 1688, King James II used the Cathedral during his time in Ireland to hold Catholic mass. And while I was visiting the Cathedral and enjoying the Choral Evensong, caterers were setting up in the south transept for some sort of evening affair. (This kind of flexible use is why you rarely see pews in the naves of large churches and cathedrals.) If you’d like to hire out the cathedral for your event, click here. 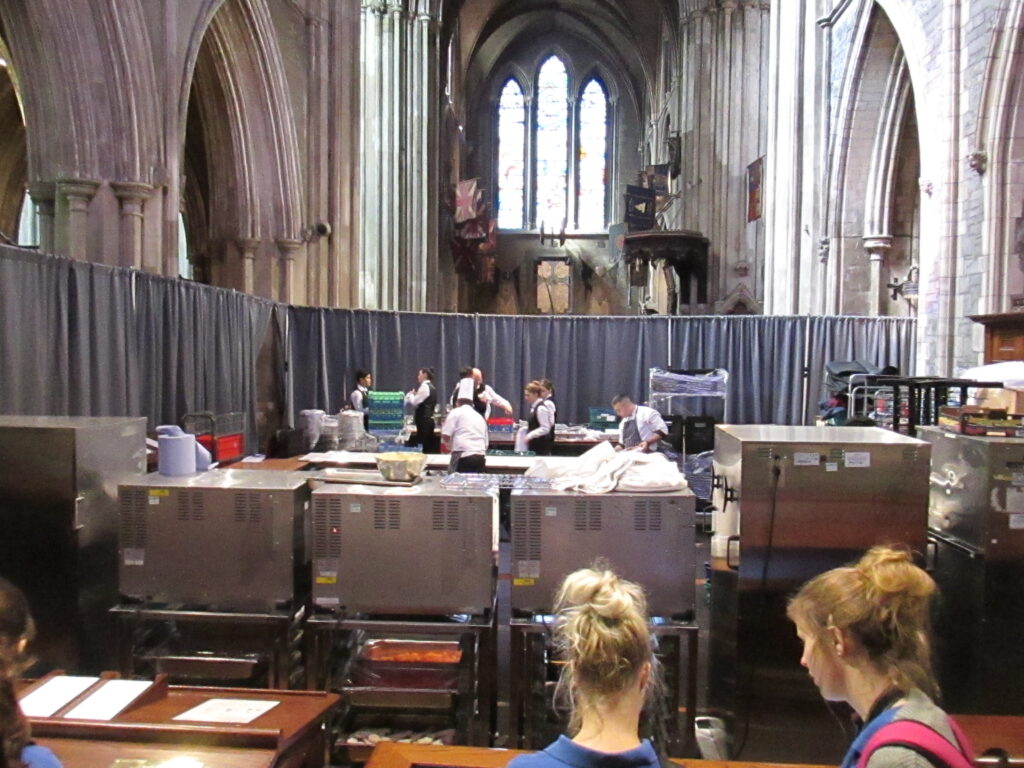 By the start of the 19th century, the Cathedral was in a dire state of disrepair. The north transept of the Cathedral (which was used as a separate chapel) was deemed unsafe for use. An effort was made by Dean Pakenham to raise funds for necessary repair; however, this did not come close to the quantities of funds needed. The Cathedral was handed a lifeline by church member Benjamin Lee Guinness who wrote a letter to the board in 1860 offering to bear the total cost of the restoration. His sole stipulation was that he be not interfered with by the Cathedral board in this work. I guess desperate times called for desperate measures!

The Cathedral was closed between 1860 and 1865 for a massive restoration and repair project. It was carried out on a design/build basis, with Guinness personally overseeing all the work and providing liturgical design guidance. Among the many changes to the interior, the most significant (and the most controversial) was the removal of the screens which separated the nave, choir and transepts and the walls that separated the north & south transepts to create an open-plan layout that was in keeping with a post-reformation Cathedral where the clergy and congregation were treated as equals. (Kudos to him for that forward-thinking attitude!) Overall Guinness spent between 130,000 and 150,000 pounds on the restoration of the building. There is a wonderful video about Guinness’ restoration and the continuation of his plans by his sons on YouTube. It includes some great interior views of the cathedral and is well worth watching. 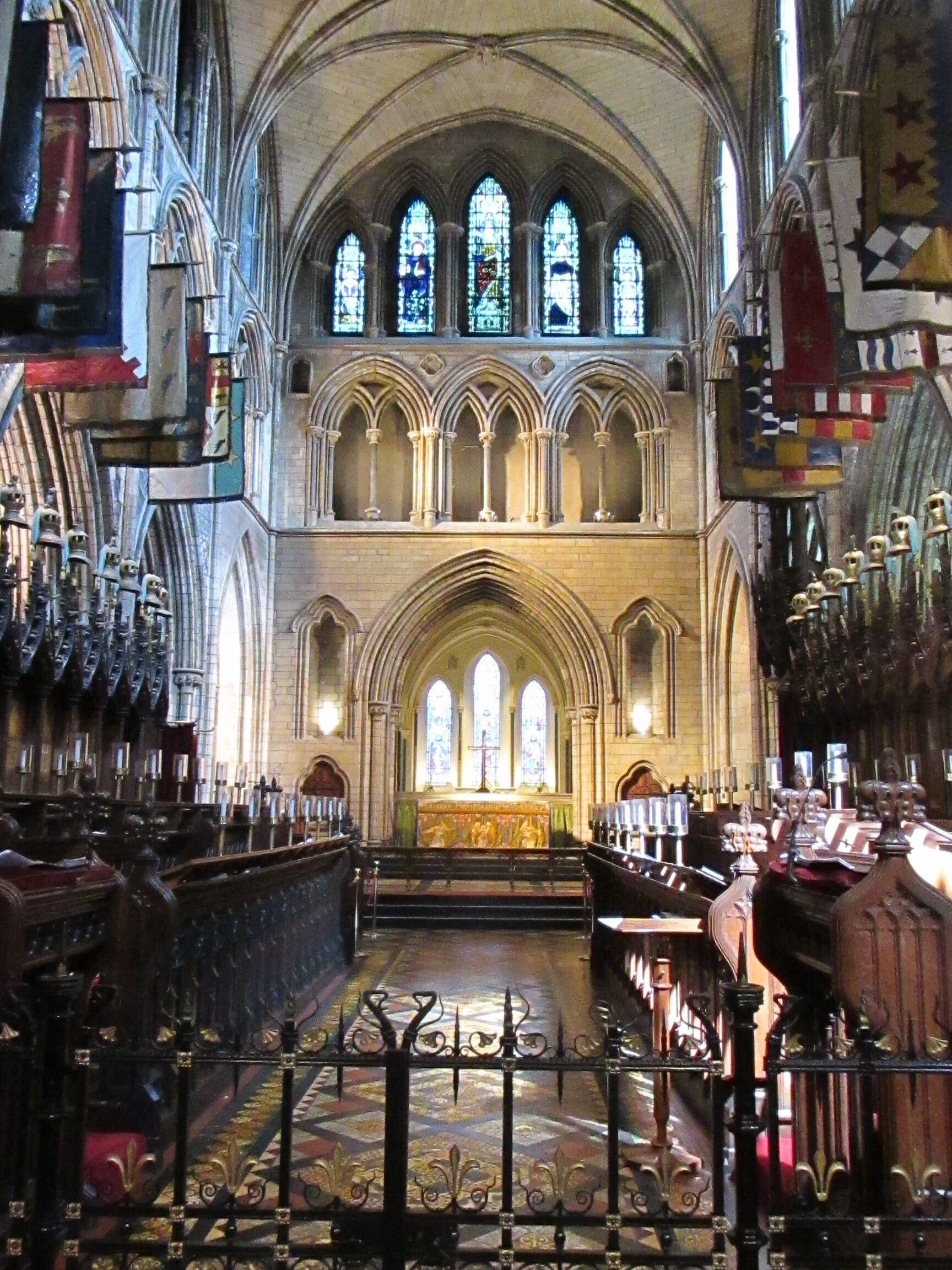 As I mentioned earlier, I timed my visit so that I could participate in the Choral Evensong service. Saint Patrick’s Cathedral has a strong musical tradition, with music playing an integral part in its daily life since its foundation in the thirteenth century.

Henri de Londres (consecrated Archbishop of Dublin in 1213) created a college of sixteen vicars choral who lived within the precincts of the cathedral. Archbishop Richard Talbot (Archbishop of Dublin from 1418–49) endowed a college of six minor canons and six boy choristers in 1431. His purpose was to ensure the provision of polyphonic choral music in the Cathedral. Some three centuries later the combined choirs of Christ Church and Saint Patrick’s Cathedrals sang the first performance of Handel’s oratorio Messiah on April 13, 1742. The nearby Choir School supplies most of the choristers for the 12 services a week. It is the last of its kind in Ireland and is always looking for new boys and girls to join their ranks. Here is a little sample of their music.

Because of the Cathedral’s long history, it has become a sort of museum as well. Saint Patrick’s association with particular families or individuals is manifested through the large variety of plaques, monuments and statues that adorn the walls and aisles of the building. The Cathedral’s gift shop is also set up right in the nave. As you enter through the side doors, this is what first greets you, followed by all the statues and plaques. If you are a history buff and want to see memorials and gravesite of famous people – including Jonathan Swift – all this might appeal to you more than it appeals to me as an architect. For me, the details like the tile floors and the stone spiral stair to the organ are much more interesting than the overall worship space, the quality of which seems to be diminished by everything else that it houses. 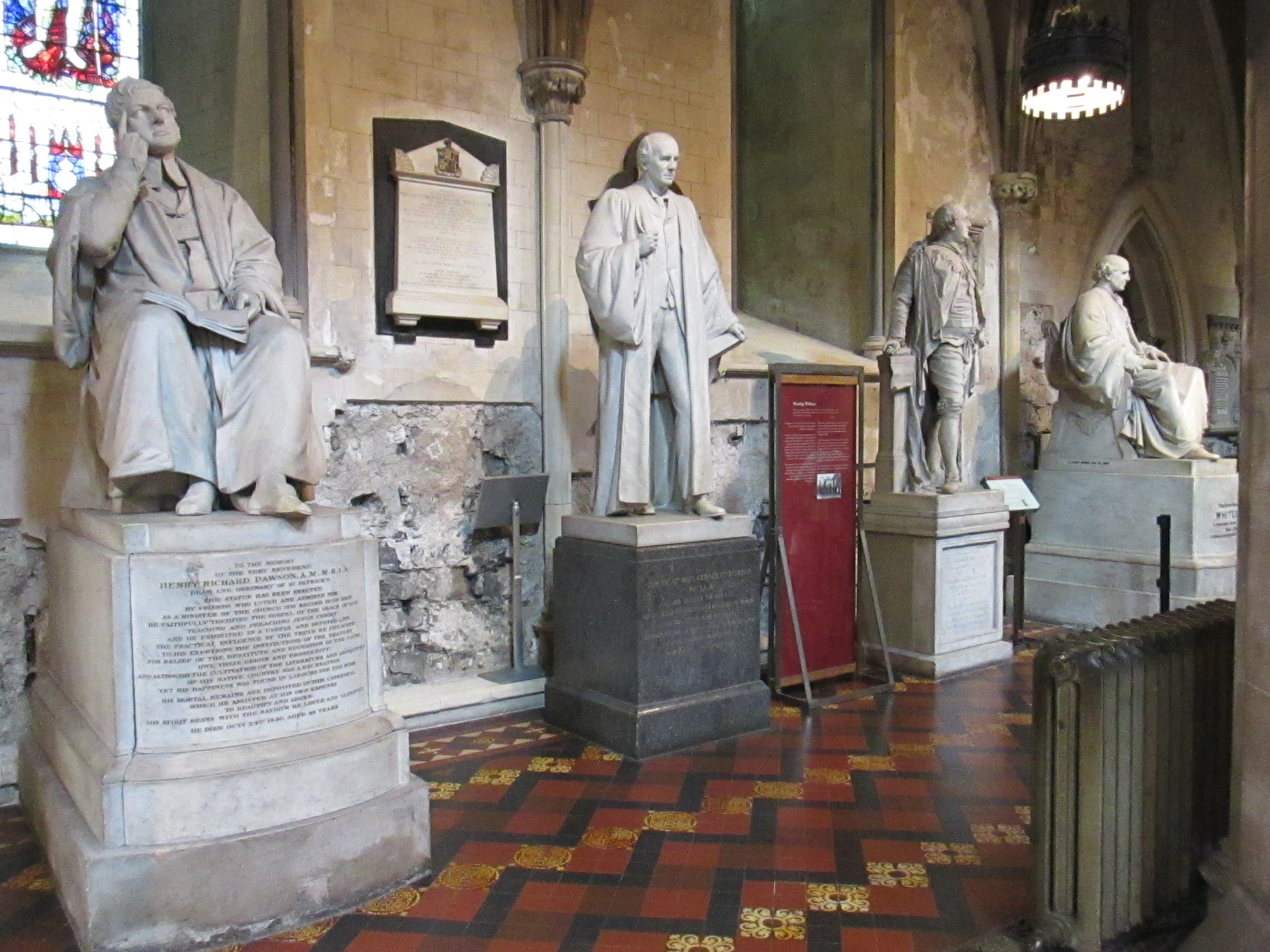 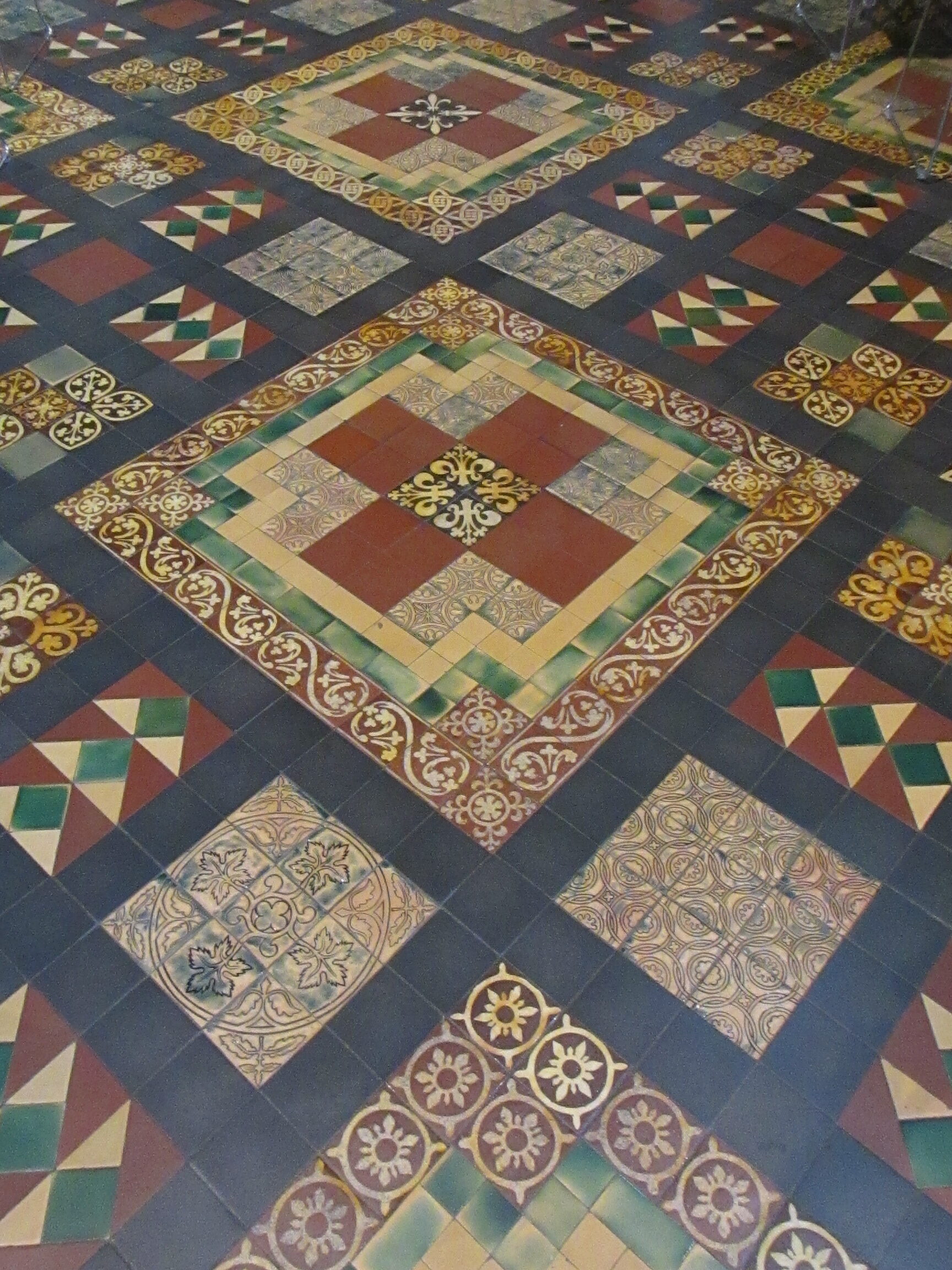 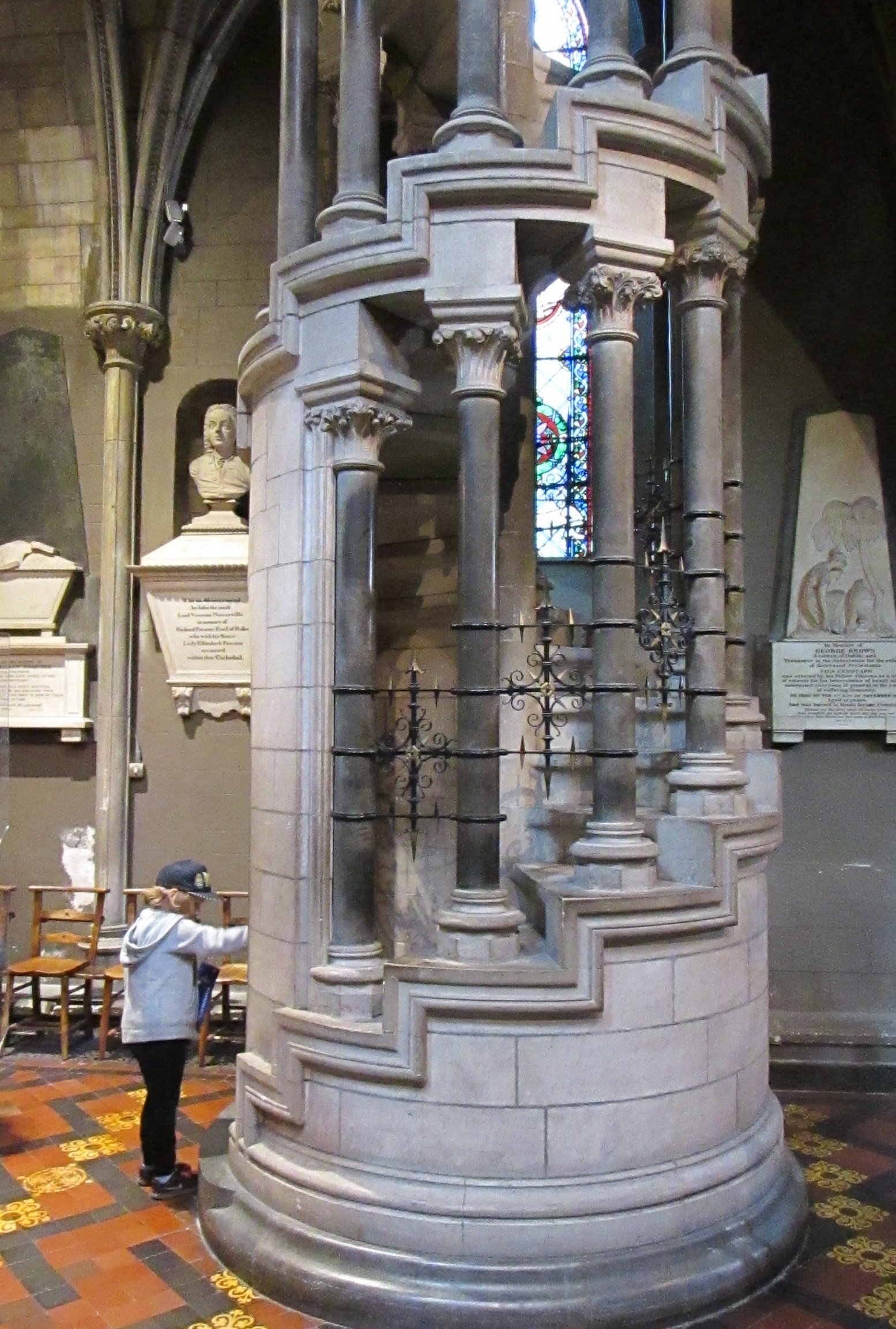 One final note of interest for those interested in the ongoing restoration work of the Cathedral. They are currently working to restore the slate roof – a €9 million project. The German-made layered scaffolding system being used for this work is very unique and is worth a look. If you want to contribute to the restoration, you can sponsor a slate here.