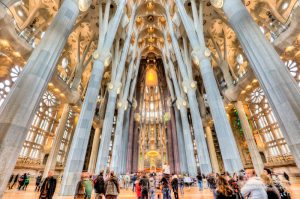 Speaking of the Sagrada Familia, I recently saw a reference to an article published several years ago in Faith & Form magazine about Extraordinary Architectural Experiences. From April 2007 to April 2008, two parallel and independent online surveys (one in English, the other in Spanish) were conducted to gather information about people’s most profound, lasting, and/or intense experiences of architecture. The surveys defined Extraordinary Architectural Experiences (or EAEs) as:

…an encounter with a building or a place that fundamentally alters one’s normal state of being. A “fundamental alteration” is a powerful and lasting shift in one’s physical, perceptual, emotional, intellectual, and/or spiritual appreciation of architecture. Contrarily, an ordinary experience of architecture, however interesting or engaging, does not cause a significant impact on one’s life.

As an architect who designs sacred spaces, I would most certainly aspire to create EAEs when I design or renovate worship spaces. Based on my own limited research, there is another way that a building can alter one’s state of being, which has to do with a collection of experiences in that space, as opposed to the initial impressions that the research in the article describes. In any case, the article is well worth reading if you are interested in EAEs yourself.

I referenced the Sagrada Familia in the beginning of this post because it is the number one site on the Top Ten List from the English survey. It is also on the Spanish survey, along with the Barcelona Pavilion, which I will certainly have to add to my list of stops while in Barcelona. 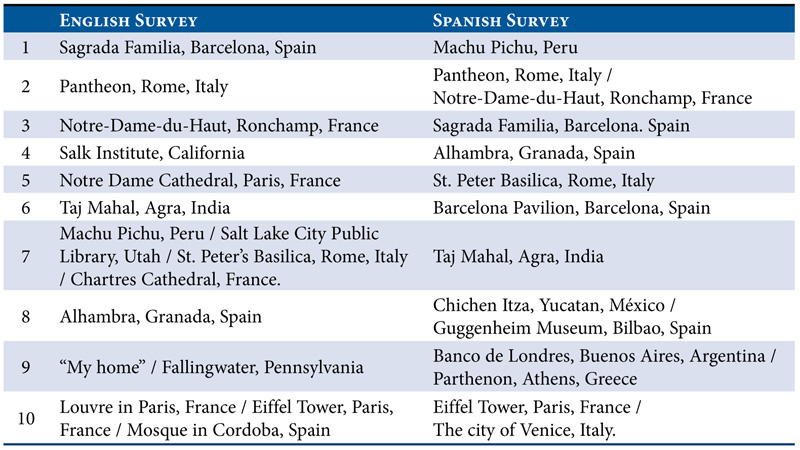 Rereading the definition of EAEs, I can see why I have always been drawn to church architecture. Who doesn’t want one’s normal state of being altered from time to time? Not surprisingly, there are several sacred sites on both lists – some of which I have been fortunate enough to visit.

As the article says, the thrust of the findings gives scientific validity to what the ancients and designers of sacred places for millennia have known intuitively: architecture can touch the soul and fill the spirit. So to all those involved in the creation of new or renovated worship spaces that have the potential to touch the soul and fill the spirit – whether they be architects, engineers, clients, committee members, artists, craftspeople or contractors – I say let us continue to work together toward the creation of Extraordinary Architectural Experiences! In the meantime, I will continue to visit these sites to experience and learn from them.