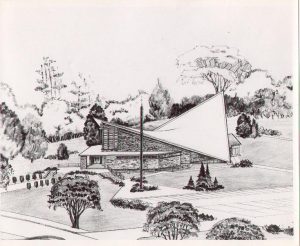 St. Athanasius Church in Reading, MA was designed during a building boom for Roman Catholic churches in the Archdiocese of Boston. According to the design architect, Daniel Tully, who was working for the Archdiocese at the time, he was given free reign in the design of this new church. Mr. Tully had studied thin shell structures at MIT and envisioned enclosing the worship space under a roof in the form of a hyperbolic paraboloid. A hyperbolic paraboloid combines both upward and downward curvature in the same surface. (The easiest way to envision this is to go get a can of Pringles.) Mr. Tully designed a church rich with symbolism and meaning – most of it contained within the design itself, rather than using traditional representational art. The church was completed and dedicated in 1962. The design of this church launched a successful career for Mr. Tully built on using thin shell roof structures like this one.

In the 50+ years since it was dedicated, there have been a few renovations to St. Athanasius Church. Communion rails were modified, then disappeared altogether. Confessionals were converted to everything from shrines to closets. Baptismal fonts came and went. But always remaining was the tall, white brick wall behind the altar. At over thirty feet tall, it dwarfed anyone who stood in front of it. (The hand-carved figure of Christ on the cross, at 15 feet tall, was the one exception.) At the back of the church, new heating pipes that had been run up to the balcony had been left exposed and detracted from the clean lines of the original building design. The acoustical ceiling, originally sky blue, had turned dark gray and there was great concern that the asbestos fibers in it might start to fall onto the people below. And the maintenance staff was getting very tired of relamping the more than 200 light fixtures every time the incandescent lamps burned out. It was time for some modernization.

Modernizing a Modern style building can be quite a challenge. The style is often seen as dated and the desire to improve such buildings often leads to either covering them up or introducing incompatible elements. When we started working with the Renovation Committee at St. Athanasius, we tried to focus on what was good about the space and to preserve those elements in the renovation. We wanted to respect Mr. Tully’s design while enhancing the worship experience for the parishioners. The committee was very much on board with this approach.

On Saturday, Oct. 5, 2013, the parishioners moved from their temporary worship space in the Parish Activity Center back into the renovated worship space. (See before and after photos below.) While the new, white ceiling with all ceiling fixtures relamped with new LED bulbs did a lot to brighten up the space, the biggest impact was made by the introduction of a new wood treatment on the brick wall behind the altar. The treatment consists of interlocking tiles of walnut strips, arranged in a unique pattern. The range of colors reflect the colors of the crucifix and the angles of the panels reflect the angularity of the worship space. The wall treatment incorporates a gentle wave in its design, bringing worshipers’ focus to the altar and the crucifix. The warm, rich color of the wood and the relatively low height of the wall treatment brings a human scale and intimacy to the building that was missing. Parishioners noticed how much better they could see the celebrant and how much closer it made them feel to the liturgical action. 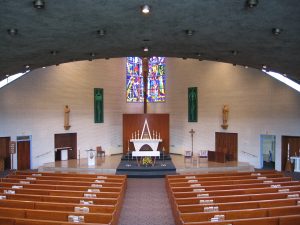 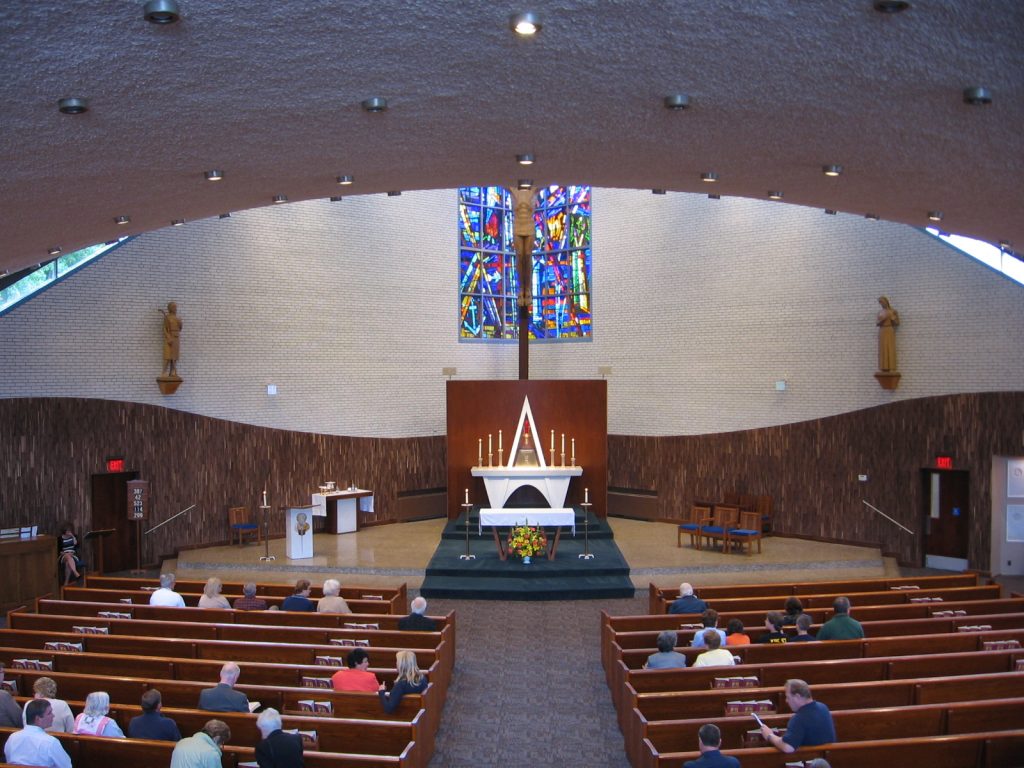 Although I have renovated many historic churches, I have never had the chance to hear what the original architect might think of my work, as they are typically no longer alive. Last Saturday was an exception to that. Mr. Tully traveled from Santa Fe, NM just to see what had been done to his original design. After the dedication Mass, Mr. Tully confessed to me that he had no idea what to expect when he came in the building. But it turns out he was very pleased with the renovation. I explained to him how I had attempted to add to his work rather than change it. He appreciated the choice of materials and the careful implementation. Fortunately, Mr. Tully was not the only person who felt that way. Parishioners were also very pleased with the renovations, as was the pastor, Rev. Darin Colarusso.

My thanks to Carr Enterprises, Ltd. of Peabody, MA, and especially to project manager Adam Gray, who had to work around and with two other contractors the church hired to replace the ceiling. It took a significant effort to get the church ready for occupancy (and a wedding on Oct. 12) in the four weeks they had to complete the job but Mr. Gray worked diligently to make that happen.

Renewing older worship spaces to make them more suitable for today’s worshipers is a challenge that I love to face. If you are wondering what could be done with your worship space, stop wondering and give me a call. You’d be amazed at what can be done.