Several of us at Foresight Architects have been very busy traveling back and forth to Demarest, NJ on a regular basis since last year to guide the construction process for the new worship space at St. Joseph Church. Over the past few weeks, most of the clay tile roofing has been installed on the upper roof. 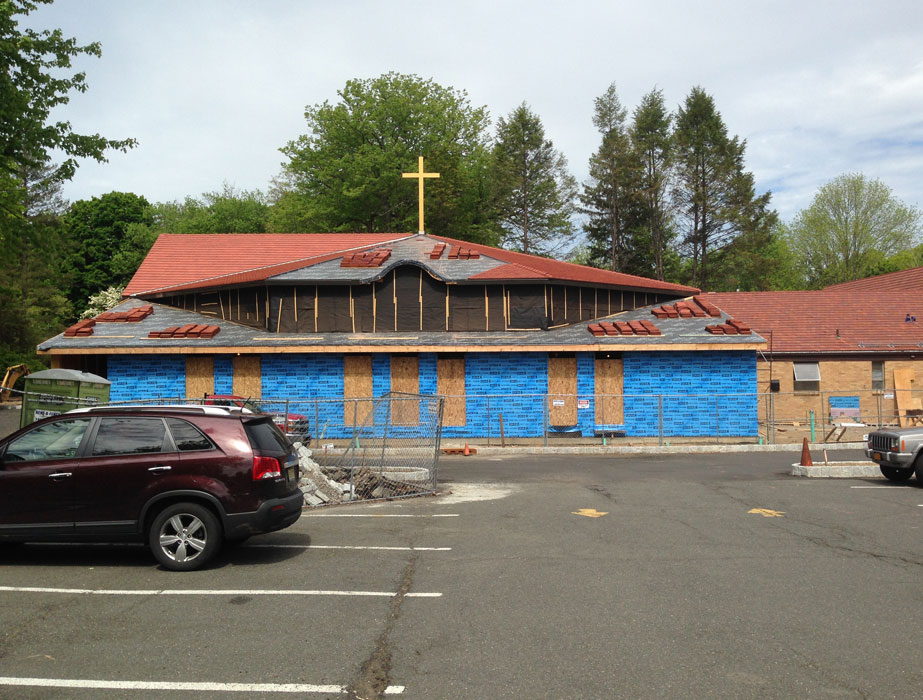 The decision to use clay tile for the roof of the addition was based on a number of factors. The roof on the original building, built in the 1950’s, was still in excellent condition more than 50 years later. Of course, we wanted the roof of the addition to match the roof of the original building; however, a tile roof would be much more expensive than a typical asphalt shingle roof. We considered removing the existing tile roof and adding insulation and a new asphalt shingle roof. But when we ran the calculations, we found out that insulating the roof of the existing church would have a forty-year payback so it was probably not a wise investment of $60,000 or more.

Because the existing tile roof was only a little more than halfway through its 100-year life expectancy, it did not make sense to remove it if it was still working (which most of it was). Because of the high cost of removing and replacing the existing tile roof, we determined that the cost of providing a similar tile roof on the new church would be the same cost as removing all the existing tile and installing asphalt shingles throughout. Whereas asphalt shingles typically have a lifespan of around thirty years, the roof tiles have a 75-year warranty and often last 100 years or more. By saving the roof tiles from the portion of the building that would be demolished (which were slightly different than the tiles we could buy today), future repairs to the original would be less expensive, as the tiles would not have to be custom made for the repairs.

Fortunately, the same company that made the original roof tiles (and the vast majority of clay roof tiles sold in the last century or so) was still in business and still made a very similar product. It is their tiles that you see being installed in the photo.