King Louis IX was quite a remarkable man and leader. The only French monarch to be canonized, he had a long history of devotion to God, making just decisions (during his lifetime, he was know as the “fairest man in the world”) and serving the poor. Beginning with an abbey at Royaumont, he went on to build many hospitals and homes for those who needed them, including a hostel outside Paris that became home to a large group of women who had been driven by poverty to prostitution. Louis called it the House of the Daughters of God. 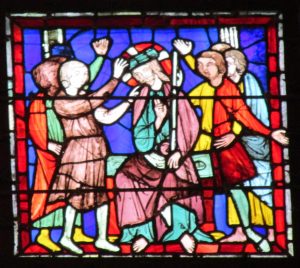 to be worn by Jesus on the Cross. Louis took his whole court with him to meet the Dominican brothers who brought the Crown to France. Then, to house this treasure, he tore down his chapel of St. Nicholas and built the lovely Sainte Chapelle, sparing no expense to make sure that the new chapel would be a suitable setting for his collection of relics of Christ, which, in addition to the Crown of Thorns, included some thirty other items. Though the building is remarkable for its architecture – it is considered among the highest achievements of the Rayonnant period of Gothic architecture – it is equally impressive for how quickly it was built. Begun some time after 1239 and consecrated on 26 April 1248, it contains two separate chapels on two levels, with the upper chapel being reserved for the use of the Royal Christians and the display of the Crown of Thorns. 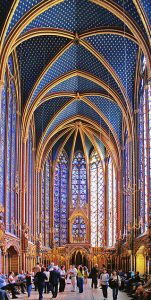 The most famous features of the upper chapel are the great stained glass windows, for whose benefit the stone wall surface is reduced to little more than a delicate framework. Fifteen huge mid-13th-century windows (6,500 square feet) fill the nave and apse, while a large rose window with Flamboyant tracery (added to the upper chapel c.1490) dominates the western wall. (I was not able to see the rose window and several of the other windows due to ongoing restoration of these windows and their frames.) Most reliquaries are small, jeweled boxes that contain sacred items. Standing inside this large scale reliquary gave me the feeling of being inside an impossibly delicate glass box and that I had been reduced to a miniature myself. With hundreds of scenes in each window, I could have spent the entire day “reading” the Bible and the history of the Crown of Thorns in those windows.

This immersive experience was quite the opposite of my visit to the Royal Chapel at Versailles a couple of days earlier. Completed in 1710 by King Louis IV and dedicated to the aforementioned Saint Louis, it is a magnificent combination of Gothic and Baroque architecture. Like Sainte-Chapelle, the building is divided vertically based on royal status. The king would sit in the royal gallery on the upper level, surrounded by his family. The ladies of the Court occupied the side galleries. The “officers” and the public sat in the nave. The king would only go down to the nave for important religious celebrations during which he received communion. 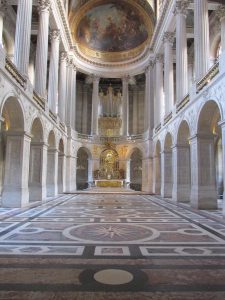 The king and queen’s presence at the service was an important part of protocol; seeing the King and Queen (and being seen by them) was highly anticipated by members of the court.  Members of the public could also crowd  into the chapel in the hopes of a glimpse of their King and Queen.  As one person who managed to squeeze in noted, “very few people listened to the Mass, everyone was busy looking at the King.”

During our tour of Versailles, we were allowed to look into the chapel from both the upper and lower entry doors – but not step inside at all. While it gave a general idea of the space, this interactive tour (which is one of the best I have ever seen) allowed me to see the entire space – even at different times of the day. What I could not see from my peek inside the doors was the lovely windows, which were mostly clear, rimmed with stained glass. It allowed for a wonderful quality of light in this impeccably designed and executed space.

Helping Historic Houses of Worship
Spaces where God can be found