When the Church of the Guardian Angel in Allendale, NJ was built in the 1950’s, it had a beautiful black marble altar. Unfortunately, due to defects in the stone, it eventually started to fall apart and was replaced with a wood altar. There had originally been two pink granite side altars. One had been moved to the Narthex but the other remained in its original location.

There is no record of any relics having been placed in the original altar at Guardian Angel, even though it was common practice at the time. If there had been relics in the original altar, as far as anyone knew, they were long gone. So you can imagine the pastor’s surprise when one of the workers on the current renovation came up to him and said, “I think this is something you might want.”

It had come out of the remaining side altar when it was moved to be reused elsewhere in the church. The small, gold-plated sterling silver box was wrapped in plastic and sealed with a wax seal. We are in the midst of installing a salvaged marble altar in the renovated church and we wondered if these relics should be placed beneath the new altar so we checked with Fr. Thomas Dente, Director of the Office of Worship for the Archdiocese of Newark. Fr. Tom informed us that, according to The Dedication of a Church and Altar, the tradition in the Roman liturgy of placing relics of martyrs or other saints beneath the altar should be preserved, if possible. But the following should be noted:

a) Such relics should be of a size sufficient for them to be recognized as parts of human bodies. Hence excessively small relics of one or more saints must not be placed beneath the altar.

b) The greatest care must be taken to determine whether the relics in question are authentic. It is better for an altar to be dedicated without relics than to have relics of doubtful authenticity placed beneath it.

Although the design of the altar would permit us to place the relics beneath the table of the altar, we would need to open the little box to see what was inside. Based on the size, we were fairly certain that there were not recognizable parts of human bodies inside but the pastor decided to open it nonetheless. 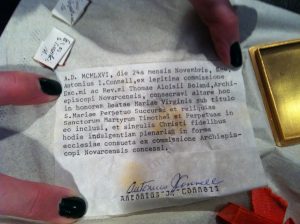 Fortunately for us, someone was kind enough to document the contents and when they were placed in the altar. With the pastor’s knowledge of Latin, we learned the name of the Bishop who had consecrated the altar and the identity of the relics, which apparently came from St. Timothy the Martyr and St. Perpetua. The relics themselves (small pieces of bone) were wrapped and sealed as well. We left those unopened and returned the contents to the metal box.

By the time this church was built, side altars were not regularly used to celebrate the Mass so it seems a bit odd that there would be a relic on a side altar. Had anyone found a relic when the other side altar was moved? Whatever happened to the relic in the main altar when it was removed? Had the relics been moved to a side altar for safekeeping? Perhaps a long-time parishioner might know the answer to these questions. I’m sure the pastor would love to hear the answers to these questions. I know I would! Anyone???

Angels come to Allendale
Our Lady of Mercy converted!