Last night I attended an event at Macedonia Baptist Church in Albany, NY hosted by the Men’s Fellowship. After the event, I asked the pastor if I could have a look at the sanctuary. I was curious to see it as it was one of the first projects I had designed after starting my own firm. Working with liturgical designer Rev. Richard Vosko, we undid a 70’s renovation of this typical example of a building built as a school gym to be used temporarily as a church until a real church could be built – except it never was. As part of the renovation, the altar table was located in a more central location, using the existing flexible seating to create a greater sense of community.  A new, permanent font that allows for adult immersion was located near the main entrance.  A new chapel for the Reserved Sacrament was also created.  In order to provide focus for the liturgical action and control the external environmental factors, existing Kalwall window walls were covered with custom wood window treatments and new platforms for the altar table and music ministry were also constructed.  New lighting and sound systems completed the renovation. 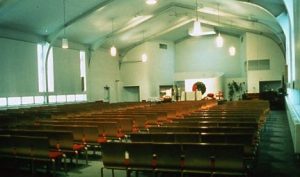 Our Lady of Mercy Church after the 1970’s renovation 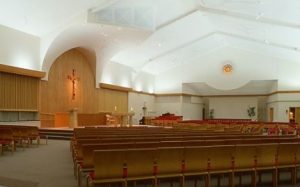 Our Lady of Mercy Church after the 1995 renovation

If some of that sounds odd for a Baptist Church, that’s because it wasn’t a Baptist Church at the time – it was Our Lady of Mercy Roman Catholic Church. Macedonia Baptist Church purchased the property from the Diocese of Albany in 2011, after Our Lady of Mercy was merged with another local parish. I was curious to see how the space had been adapted for its new congregation. The pastor, Rev. Leonard D. Comithier, Jr., was happy to show me and a couple of other members of my church around the sanctuary. 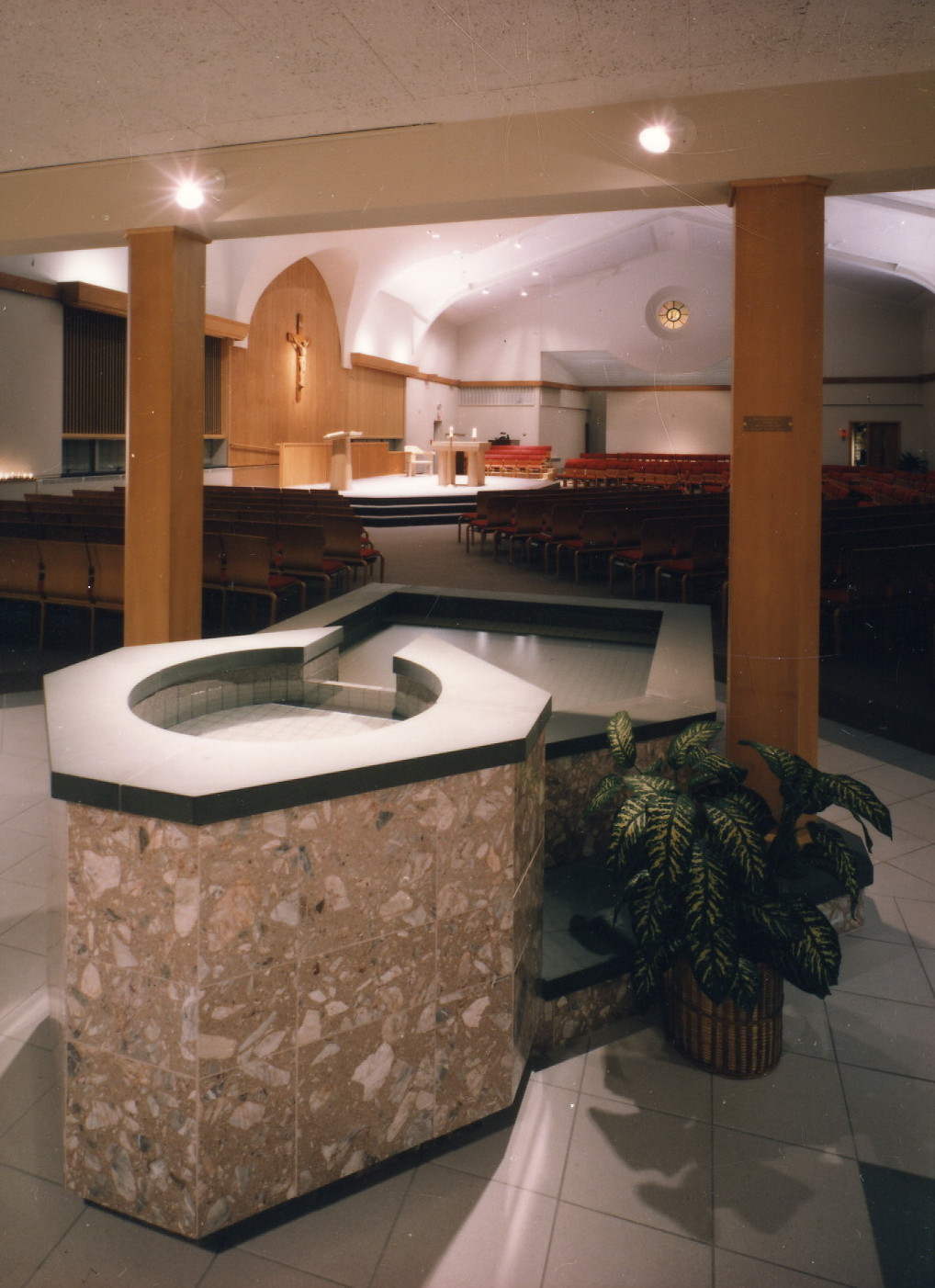 As he opened the door to the sanctuary, I was greeted by the very same baptismal font that we had installed in 1995, still filled with water. Knowing how important the baptismal pool is to Baptists, I asked Rev. Comithier how it was working for them. He smiled and related to me the story of the very first time they used it, when he had 8 adults to baptize. Members of the church were wondering how he would make do with such a shallow pool but Rev. Comithier told them not to worry – that he would use the same creativity that they see in his preaching for the baptisms. Fortunately, we had designed the baptismal pool for adult immersion baptisms (one of the first in the diocese). Rev. Comithier would have those being baptized sit on the floor of the pool. He could then lean them back until their entire body was underwater. The first baptisms at Macedonia Baptist Church’s new place of worship were a great success!

Turning my gaze to the remainder of the space, I saw that very little had changed. The same bent plywood chairs were arranged in virtually the same arrangement we had designed. Of course, the altar had been replaced by a central pulpit, with a new communion table on the floor in front of the raised platform and the risen Christ statue replaced by a beautiful cross brought over from their old church on Allen St. The one stained glass window in the space had been replaced with one featuring Macedonia’s logo. The space allotted for the Music Ministry was too small for a Baptist choir, so new risers had been built and placed on the old sanctuary platform that had previously been used for Daily Mass. The Reservation Chapel had become a “comfort room” and they were in the process of building a new sound booth. The most amusing change was the replacement of the icon of Our Lady of Mercy in a lighted niche by a new wall-mounted defibrillator. Rev. Comithier and I had a good laugh over that one.

Rev. Comithier mentioned that they were in the process of replacing the chairs. I asked him why and his explanation was simple. “These are Catholic chairs, not Baptist chairs.” I asked him to explain his curious response. He said, “The old chairs are fine if you’re only going to sit in them for an hour but no good at all for a two-hour service!” (I’ve sat in those chairs and I would have to agree.) So far, they’ve found an Episcopal church that will take 75 of them but they are looking to get rid of a few hundred more before the new chairs arrive sometime before Easter.

I left Macedonia Baptist Church feeling very good. I had enjoyed a nice evening with the Men’s Fellowship groups from Macedonia and from my church, including a wonderful meal prepared by Macedonia’s Culinary/Hospitality Ministry, had heard a compelling talk on human trafficking and had had a chance to look in on a 19-year old project and see that it was still working – even with a new congregation. I feel very honored to be able to play a part in the creation of spaces where people can connect with God year after year. I am grateful that the work we did at 26 Wilson Avenue we live on to serve another wonderful congregation.