Saying “adieu” to Paris, we took the express train to Lyon, where our good friends the Ginots picked us up and drove us to their lovely home outside the city, where we would spend the next few days. Approaching their village, I saw and asked about a beautiful Gothic church on a hill I saw through the car window. “Oh, that’s nothing important. That’s just a parish church,” my friend told me. True, it was just a parish church, constructed between 1866 and 1872. A search online did not turn up much more about it so my “visit” was limited to a couple of views a day from inside the car. 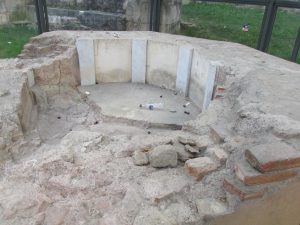 Our friends had arranged a private tour of parts of the old city of Lyon. We started with the Lyon Cathedral (also known as the Cathédrale Saint-Jean-Baptiste de Lyon). Though built in the twelfth century, we started our tour with the ruins of the 6th-century church upon which it was constructed. Of greatest interest to me were the ruins of the baptistry, an octagonal one such as we would see in the excavations at Milan at the end of our trip. I’m not sure if the plastic enclosure behind it was meant to protect it or to make something useful out of the ruins (such as a shelter), but it was interesting to see such an old baptismal font nonetheless. 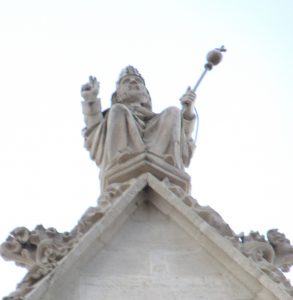 Like so many other cathedrals, the Lyon Cathedral took over four centuries to build and was not completed until 1476. Not surprisingly, given the duration of its construction, it combines Romanesque and Gothic styles and is considered one of the most interesting churches in France. The building is 80 meters long (internally), 20 meters wide at the choir, and 32.5 meters high in the nave. Our tour guide pointed out a very unusual detail at the very top of the front facade of the cathedral – a statue of God the Father. (Click on the image for a better view.) A close look at the facade reveals mostly empty niches rather than the typical beheaded saints from the time of the French Revolution. It seems that almost all the statues were destroyed and the angel statues in the three portals were beheaded more than 200 years earlier by Baron des Adrets during the French Wars of Religion.

Until the construction of the Basilica of Notre-Dame de Fourvière, it was the pre-eminent church in Lyon. After a fascinating tour of the nearby traboules, we headed to the Basilica to see the church that upstaged the Cathedral. 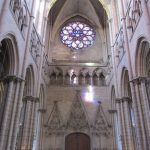 Interior looking toward the main entry with the beautiful rose window by Henry de Nivelle.

Front facade of the cathedral. Photo by Benoit Mortgat. 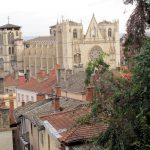 A view of the cathedral while descending from Fourviere Hill.

A Camel in Columbus This Is Not
What about those Cry Rooms?