As a person who works with committees, I’ve heard the expression more than once that a camel is a horse designed by a committee. I couldn’t disagree more and today’s ride to the Port Columbus International Airport reaffirmed my belief. 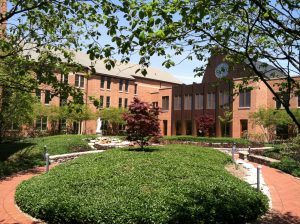 I was being driven to the airport by one of the residents of St. Mary of the Springs, where, as Board Chair for the Dominican Retreat & Conference Center in Niskayuna, NY, I had spent the morning meeting with the leadership team and others of the Dominican Sisters of Peace. During the short drive, she explained to me how their new motherhouse had been designed. She told me that all the various areas were assigned to separate committees. There were committees for the design of the rooms, the public spaces, the dining area, other special areas and, of course, for the chapel. She told me how the first thing the architect did was to have them sit in small groups and discuss for 45 minutes what was most important to them about their new motherhouse, what they cherished most. She told me that he could not have started any other way, as every participant had their own idea of how things should be. Instead of hundreds of individual ideas, there quickly emerged a consensus as to what was most important in their new facility, which then became the guiding principle of the entire design. 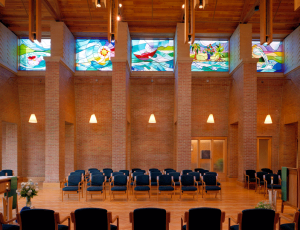 I have visited the ten-year old, 139,000 square foot facility twice and have enjoyed both my visits very much. As I told my “chauffeur”, it was obvious to me from the moment that I set foot inside the building that this was a very special place that had been designed specifically for those who live and work there. Even though its construction predated the formation of the Sisters of Peace by several years, the peacefulness of the place is palpable. Dominicans have been preaching truth, mercy, justice, and peace throughout the world for more than 800 years. Their words and deeds foster Paschal Peace and this facility embodies those values. 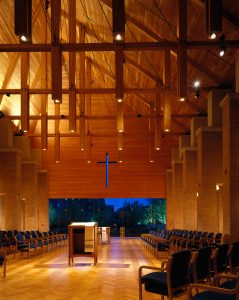 Of course, for me, the centerpiece is the chapel, which is nothing short of a work or art and artists. Recognized by both local and national architectural awards, its form and materials reflect the history and values of the congregation while still being very forward looking and contemporary.

Further adding to the beauty of the architecture is a wonderful collection of liturgical art by Ohio artists Michael Batdorf, Michael Bendele, Domenico Cavallaro, Tony Potter and Thoma Swanson, OP under the guidance of liturgical design consultant Joanne Lopez Kepes. The most striking and moving for me are the Stations of the Cross. Designed and fabricated by Mr. Bendele, rather than depicting the typical scenes from the stations, the copper reliefs depict various body parts – knees, sides, hands and faces – in a true-to-life scale. The tremendous impact of this artwork comes from placing it in an accessible area, at eye level, where they can be encountered face to face or even touched. 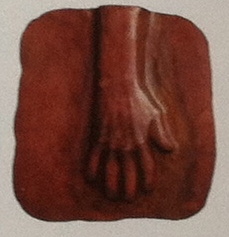 The thirteenth station – Jesus is taken down from the cross – is depicted by a single hand and forearm. The hand is pointed down, fingers spread, with the wound from the nail just slightly visible. I could not resist the temptation to place my hand over the hand in the station and the connection with Jesus’ suffering was immediate. It was the first time I had ever interacted with one of the Stations of the Cross in such an intimate way and it encouraged me to go back and spend time with the other stations.

If you ever get to Columbus, Ohio and have an hour to spare, do stop by the motherhouse chapel and say a prayer for peace. You will be glad you did.

There’s more than one solution to deferred maintenance…
Lyon Cathedral