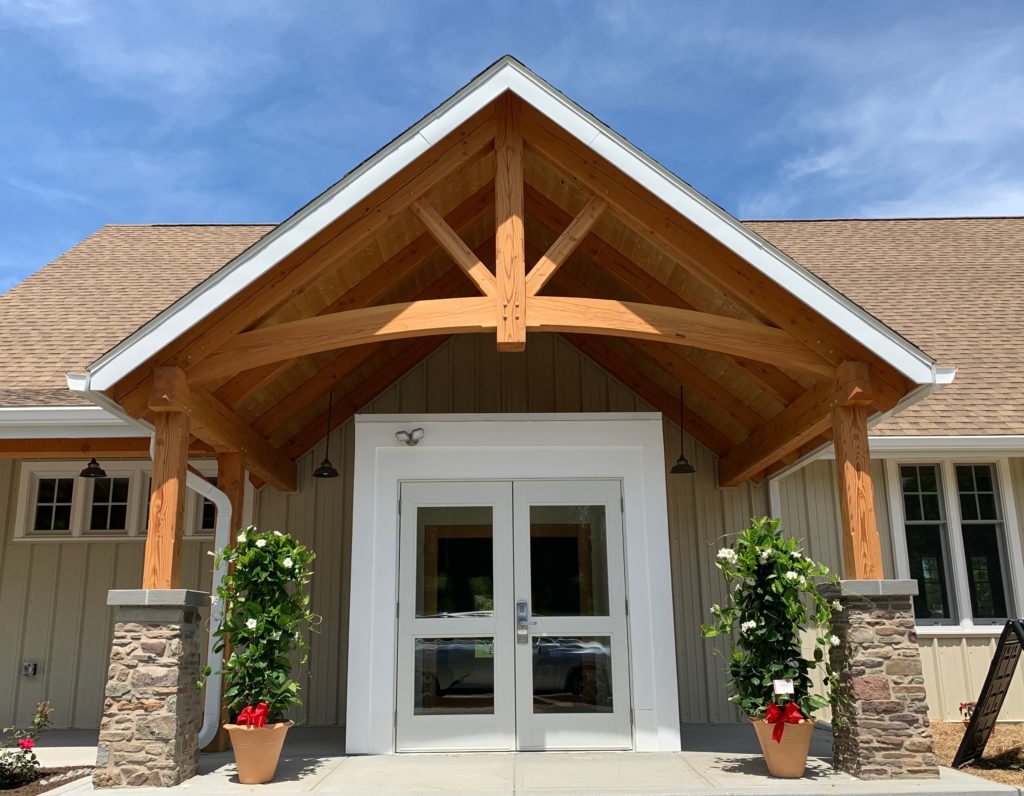 The story of Milford United Methodist Church is the story of a creative team of dedicated church members who saw the loss of their 88-year-old traditional church building to fire as an opportunity to bring Christ to more of the residents of Otsego County, NY. Led by Chairwoman Lola Rathbone, with the support of Pastor Sylvia Barrett’s enthusiastic encouragement and spiritual leadership, the small but effective Building Committee jumped feet first into finding a solution to what to do about their loss.

As good stewards, they first made sure that it made sense to rebuild their church, as so many churches in the area have been closing or consolidating over the past decades. But they (and the Methodist Conference) felt that they had the strength in numbers and willpower to continue on and rebuild.

As it turned out, there was a small, relatively new retail building just on the other side of the cemetery that was next to their church. The business had not been quite as successful as the Owner had hoped so they were open to an offer from the church to buy the property. This was a real blessing for the church for two reasons: first, they wanted to stay in the center of town and this was the only site available. (Their original site was too small to accommodate more than 4 parking spaces.) Secondly, it gave them a temporary place to worship while they planned and built their new church home.

The Milford Manor Farms building (as it was then known) was a 2-year-old insulated steel “pole barn” type structure of approximately 2,300 square feet. It was built on a concrete slab with radiant floor heat and through-wall air conditioning units. It had one universally accessible restroom and a partially installed commercial kitchen. Village water was available but village sewer services were not.

The plan was to convert the building from retail space to an assembly space for use by the church. Initially, it would function as a temporary worship space until a new addition could be built. Based on the square footage requirements provided by the church, the total square footage required, including non-programmed areas, was between 6,000 and 7,500 square feet, meaning that an addition of between 3,700 and 5,200 square feet would be required. The addition would house the new sanctuary and other related spaces, such as classrooms, meeting rooms, and offices, while the existing building will be converted into a fellowship hall and related spaces.

It was after these decisions had already been made (and the building purchased) that Foresight Architects was hired. We were tasked with designing a warm, welcoming, fully accessible, energy efficient and easily maintained facility with a sanctuary, classrooms, meeting rooms, an office and fellowship hall. The exterior design should provide good visibility of the church and tie the existing building and the addition together seamlessly. The preference was for a commanding, non-traditional style consistent with the upstate New York rural feel that includes natural elements to attract newcomers while being comfortable and welcoming to all. Interior spaces should be flexible with the ability to expand spaces for events. The design should also allow for expansion in the future should attendance increase significantly. Sustainable building principles should be used wherever possible.

Our first meeting was held on November 16, 2017 – eight months after the fire. The pastor’s goal was to be in the new sanctuary by Thanksgiving of 2018 (though she didn’t share that goal with me until a few months later.) After the programming stage, the design stage moved along quickly. As we completed the Schematic Design stage in early January of 2018, we agreed that the Negotiated Select Team project delivery method would probably be the best way to deliver this project on budget and in the quickest time possible. We interviewed a local contractor that had had a long and successful professional relationship with one of the Committee members and brought them on the team soon afterwards. It turned out to be a very fortuitous choice, as the challenge of developing the site and building the kind of church they wanted for the roughly $1,200,000 construction budget (about $213/SF, not including sitework) would require a lot of creativity and flexibility from all the team members!

Conventional wisdom is that a project is like a three-legged stool, with the legs being cost, quality and time. The trick is to balance the three legs. As cost was fixed and quality was too important to compromise, the leg that eventually wound up getting adjusted was time. So instead of Thanksgiving 2018, the building was opened in June 2019. That delay gave the church more time to seek additional funding for the project and some items that had been removed for budgeting reasons could be funded at the end of the construction. 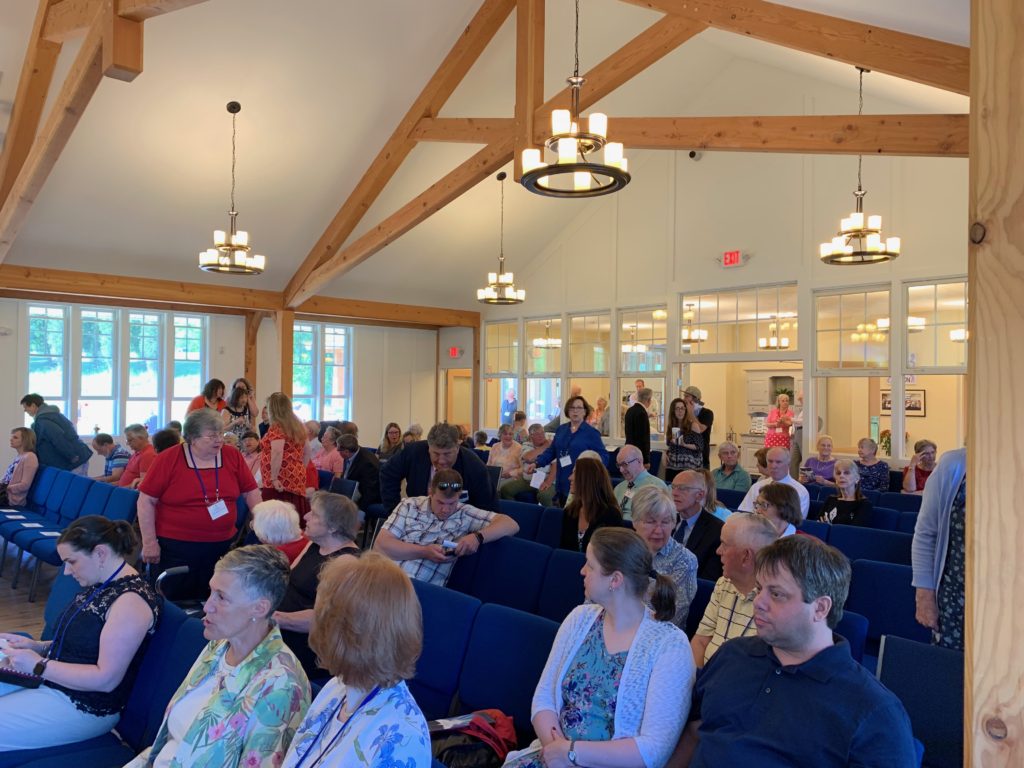 According to members of the church, who worked hard to think of everything their church could be for the community, it is now a very active center of the community, hosting both religious and secular functions. The glowing lantern atop the new addition stands as a witness to Christ’s presence in the community and the members are enjoying their new worship home – debt free! 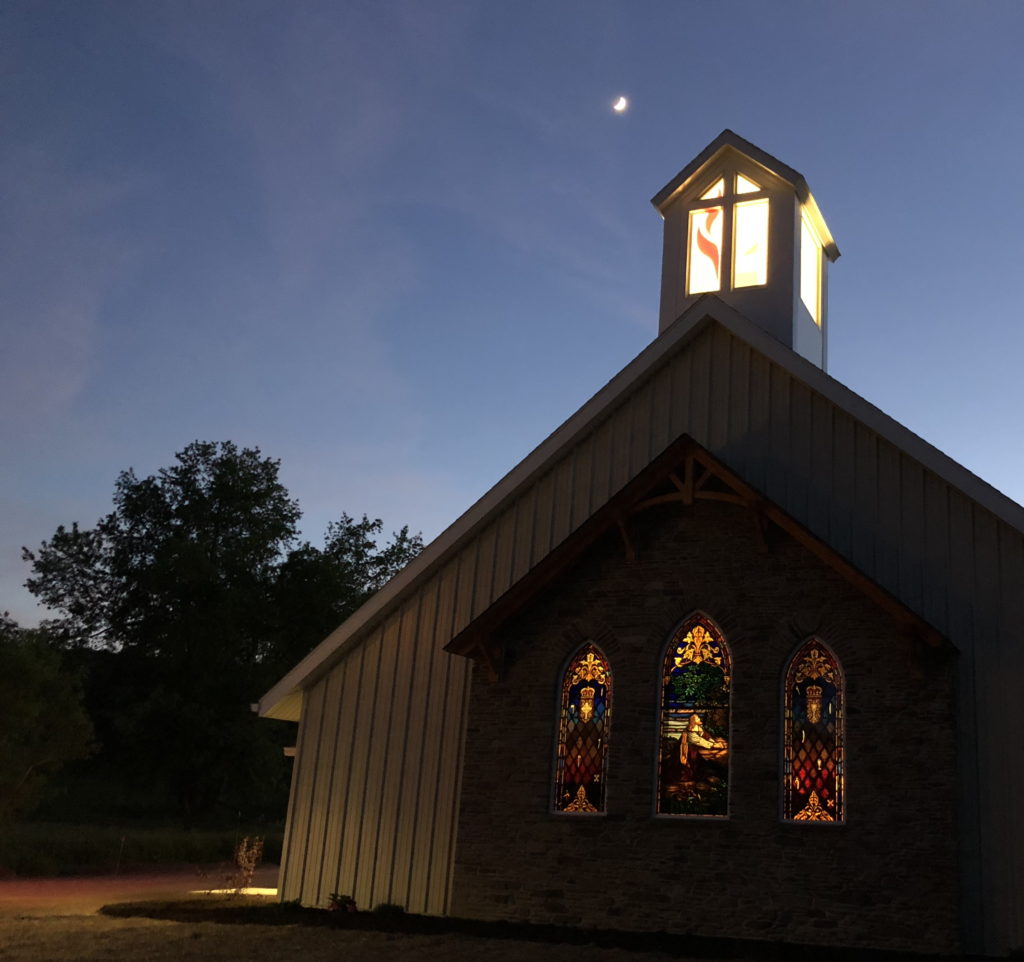