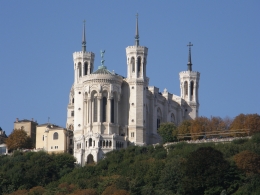 “A gleaming retro-Byzantine confection of Roman columns and religious iconography,…” is how this basilica is described on Viator’s website describing Lyon attractions. Our local tour guide told us that the basilica has the local nickname of “l’éléphant renversé” (the upside down elephant). We could see what he meant. But despite its unusual architecture, it has a very compelling story.

Built with private funds between 1872 and 1884 it is dedicated to the Virgin Mary, who saved the city of Lyon from the bubonic plague, the Black Death, that was sweeping Europe in 1643. The Virgin is also credited with saving the city a number of other times, such as from a Cholera epidemic in 1832, and a Prussian invasion in 1870.

Perched on top of the Fourvière hill, the basilica looms impressively over the city of Lyon, 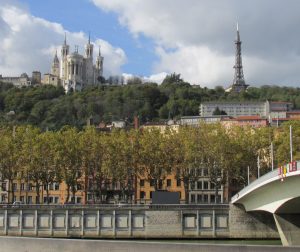 where it can be seen from many vantage points; not unintentionally, the basilica of Fourvière has become a symbol of the city. In his book Citizenship and Wars: France in Turmoil, 1870-1871, Bertrand Taithe speculates that buildings such as this basilica and Sacré-Cœur in Montmartre “were erected using private funds, as gigantic ex-votos, thanking God for the victory over the socialists and in expiation of the sins of modern France.” If this is true, then it is understandable how a rumor arose that claims that the construction of the nearby Tour Metallique less that ten years later was supported by a local government that wanted to counter such a strong religious statement by erecting a Republican monument on the same hill, at a height that would exceed the height of the basilica. True or not, it certainly competes for one’s attention when looking at Fourvière hill. And, yes, it does look a little like the Eiffel Tower, even though it has no connection to Gustave Eiffel. 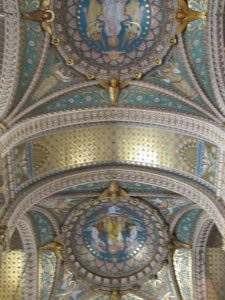 As interesting as the exterior of this building is, it does nothing to prepare you for what awaits you when you walk into the nave. Fourvière actually contains two churches, one on top of the other. The interior of the upper church is so elaborate and ornate that, although the basilica was completed in 1884, the interior was not completely finished until 1964. The richly decorated interior was intended to demonstrate the Church’s wealth and power (although in reality, it had only the former). Gilt, marble work, stained glass windows, and colored mosaics cover virtually every surface. The best way to get a sense of this interior is by looking at this virtual tour. Once you click on the arrow to start viewing the basilica, other options will appear in the bottom of the window. Enjoy! (If you happen to have a pair of 3D glasses hanging around, grab those first for an even more exciting virtual tour!) 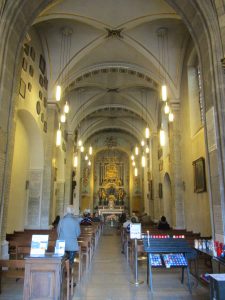 The lower church (the crypt of St-Jean), which is much simpler to begin with, is still unfinished. It consists of a variety of shrines, ranging from Our Lady of Lebanon to the Madonna of Loreto. While I was wandering from shrine to shrine, I looked up at the relatively low ceiling and began to notice that not all the carvings had been completed. I’ve put together a few before and after photos for your viewing pleasure. I have always seen stones carved before they were placed in buildings so I’m not sure if these are yet to be carved or if they just placed the uncarved blocks where the carved blocks were supposed to go because they were needed structurally. I would love to know the answer to that question, if anyone knows. Or maybe I’ll just check on the progress the next time I visit! 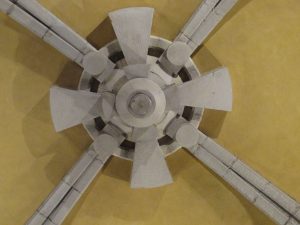 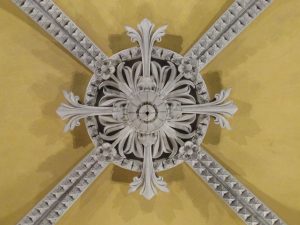 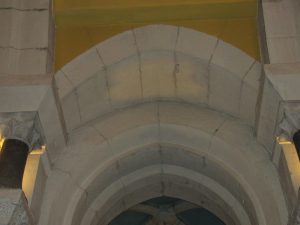 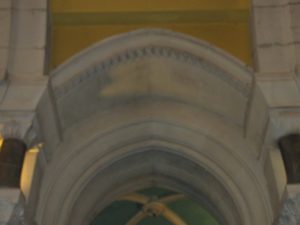 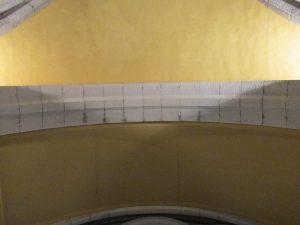 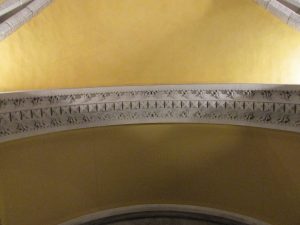