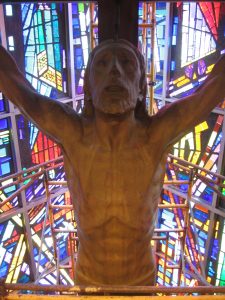 The Crucifix at St. Athanasius Church in Reading, MA was sculpted by Italo Bernardini as a labor of love. On being given the commission to sculpt the Crucifix, Italo started mulling many ideas in his mind. Tens of sketches, carbon drawings, Scripture readings. In the end he determined that the figure of Christ on the cross was to signify victory over death, a step towards resurrection.

And then he faced the imposing challenge of size. (30-foot high cross, with the 15-foot figure of Christ). A centuries–old method was used in the creation of the statue. A solid block of wood was produced by gluing smaller planks together.

The studio ceiling could not accommodate the huge raw material from which the Christus would emerge. The wooden block was laid on the floor and Italo literally labored over his massive work. Italo gave it shape by first brandishing axes and saws, then refining it with his heavy metal mallet and razor sharp chisels. To his intimates he would reveal that his toil was in reality a continuous dialog with Jesus – a way he liked to pray. He had to climb a ladder to be able to assess from above the progress of his work.

He strived to impart it a dynamic movement in space around a vertical axis, with an upwards thrust of the body, intended to signify the bursting open the confines of death. The end result was an imposing work, beautifully located in the church, apt to convey a message to the faithful as well as to complete the aesthetics of the striking and daring architectural church design.

This crucifix has been in place for over 50 years and is accessible for cleaning for the first time due to scaffolding erected for removal of the original acoustical ceiling. The gallery below shows the artist working on the crucifix and installing it at St. Athanasius. 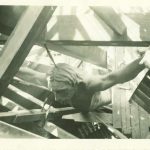 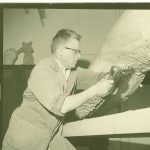 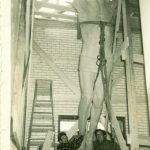 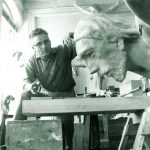 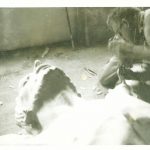 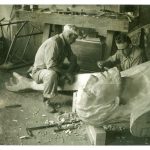