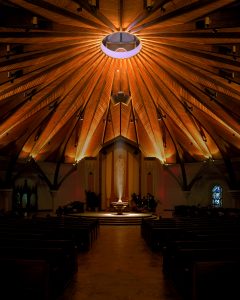 One of the things I’ve always enjoyed about designing churches is the fact that aesthetics are an important design criteria. While form usually follows function, as it should in most architecture, the expression of the form can range widely, from a simple metal box to an intricately detailed stone structure. Whereas the aesthetics are often determined strictly by budget in many other types of project (and are often given short shrift), church building committees have typically been just as concerned with the aesthetics as with the function of the building.

I should qualify that statement by saying that, in the past, it has mostly applied to mainline churches. Many of the more recent (last few decades) non-denominational churches have opted for very simple (and sometimes industrial-looking) buildings, based on the belief that money spent on “fancy” buildings is money diverted from more important things like programs and missions. The common belief was also that such an approach would make these facilities more appealing to the unchurched. But it seems like that is all starting to change.

A recent article in Worship Facilities magazine, featured the latest construction at North Coast Calvary Chapel in Carlsbad, CA. “We are good at catering to people who want to say, ‘yes’ to Jesus, but say, ‘no’ to the church” is the way senior pastor, Mark Foreman describes his church. I’d say that’s a pretty good description “unchurched”.

When the church began work on a master plan in the early 2000s, Foreman insisted on a Tuscan village design, to be characterized by whimsical layouts and a seemingly evolved mixture of colors and textures.

“Church architects have a great understanding of space usage in the interior, but exteriors 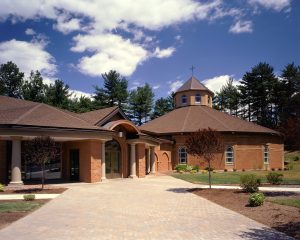 tend to look like something from Mars,” Foreman says. “Churches don’t know what they’re supposed to look like anymore. We wanted to be timeless.”

The article mentions the word “authentic” eight times. I’m not sure how a southern California campus in that is less than 20 years old that was designed to look like it was built over hundreds of years, with a design vocabulary borrowed from central Italy, conveys authenticity. However, I do think it is quite beautiful and for that I commend the pastor and the design team on a well-executed design. It looks like a very comfortable campus to spend time on.

Lest you think this is just one church going against the tide, you might be interested in this article from The Aspen Group’s blog. Apparently, recent research is showing that the popular belief that frugality in building design shows the community that the church cares about more important things than buildings may not be true at all. “It was surprising to find that the buildings that were judged by survey participants as the simplest, most austere, and least expensive were viewed as churches that are most concerned about themselves—not the community” states the researcher Matthew Niermann.

I had to smile when I read this article. Many years ago, our firm developed a statement on beauty in architecture that we include in many of our proposals. Here is an excerpt from that statement:

We believe that when it comes to works of human ingenuity rather than divine creation, architects have a significant responsibility to protect the aesthetic value of God’s creation through the design of thoughtful and beautiful buildings. We believe that the aesthetic aspects of buildings, particularly those built to last fifty to one hundred years, as most religious buildings are, should be given due consideration by our clients during the design phase.

As I said in the beginning of this post, I have been very fortunate to work mostly with church committees that share a similar belief. Consequently, our firm has an extensive portfolio of buildings designed to protect the aesthetic value of God’s creation. While the buildings we design can never equal the beauty of God’s creation, it has been a great pleasure doing our best to make a positive contribution to the built environment. I hope that, when you see the various projects on this blog, you will feel the same way.