In March 2005, James Hundt, Architect completed a Master Plan for Adirondack Community Church. This is the story of the beginning of its implementation five years later. 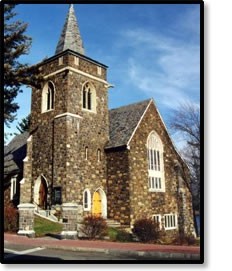 From the outside, the Adirondack Community Church in Lake Placid, N.Y., is a quaint stone church set in a mountain village that hosts a steady stream of visitors, and Olympic hopefuls.

Inside, despite the Gothic architecture, dark pews and stained glass windows, the space is surprisingly contemporary. The altar is gone, rows of pews at the back of the worship area have been removed and walls have been blown away, creating a multipurpose gathering space.

Visitors walking in through the heavy wooden doors and the small, bright outer room might be surprised to find themselves standing in an area set up like a reception area. Coffee, tea and juice are spread out on one table to the left of the center aisle near stacks of ceramic mugs. To the right, food is offered—not just cookies, but crudités on skewers, dips, fruit and coffee cake.

This hybrid of the traditional and the modern reflects the philosophy of the congregation. The early morning service is as much a nod to tradition as the Gothic architecture and stained glass windows; the mid-morning contemporary service and the fellowship area in the back of the sanctuary are a nod to the understanding that the church must embrace the future.

The members of Adirondack Community Church seem to be handling that balancing act quite well. That’s not to say the changes happened over night, came without a cost.
“Even among those who thought [change] was good, it was painful,” said the Rev. Mark Demers, pastor.

Demers, who has served the church for almost 15 years, said it was very important that he was able to stay with the church through the transition. The congregation recognized that, even when the work was hard and sometimes heartbreaking, he would stay with them.

That commitment was necessary, said former Lay Leader Daniel Lundin. “One of the things we’ve attempted to do over the years is establish the mission and vision of the church,” he said, “and then working together on strategic planning. That requires a commitment on the part of the pastor, and that’s what the laity and leadership of the church need to feel.”

Member Jennifer Newhart agrees. “Mark’s longevity [as pastor] did a lot to convince people that it wasn’t just about coming in, changing things and running away.”

The group that gathered around a table in the small chapel in the basement of the church all agreed that, though painful, change was necessary if the church was to survive.

Schmidt said that the changes began when Demers invited a group of people to attend the Willow Creek conference. “That showed how the church would be if it changed; and we were shown how it would be if it didn’t change,” she said. “We were seeing over and over in the conference that churches were closing.”

While the early morning worship service, known in the church as the “skiers’ service,” remained a traditional service, it was moved upstairs to the sanctuary from the small chapel in the basement—a move that some long-time members did not appreciate at first.
It has since begun to grow, Demers said. “The 9 a.m. service is a blessing. It is not a throwaway service—they hear the same message, but they sing hymns instead of songs.”

Gradually, recognizing that their needs and interests were being heard, though, many of the traditionalists recognized that they were not being thrown away. “We consciously made sure that no one thought they were being cast aside,” said Newhart.

“We weren’t going to leave them behind unless it was their choice. Including people who got angry or offended in the conversations was one of the best things the congregation did,” said Penny Schmidt. “We as a church family have attempted to keep in touch with people to keep them in the loop to the extent they want to be kept in the loop. Although we’ve lost some people, we’ve gained people. The shift I’m seeing is that we’re seeing a lot of younger people.”

“It’s been prayerful change,” agrees member Judith Clausing-Lundin. “It takes a lot of prayer and guidance and direction from the Lord to make these changes. Not everyone is happy all the time, but we older people have to recognize that the church belongs to younger folks.”

In addition to making some basic design changes in the sanctuary, the congregation at Lake Placid invested in audio-visual equipment and began using images and audio, something those raised in the electronic and digital ages expect. A core team of leaders also attended training in “the life-transformation effectiveness of local churches” offered by Willow Creek Association, a not-for-profit organization specializing in church leadership development.

A less traditional mid-morning service was introduced as a more relaxed and more attractive alternative for younger people. That meant not worrying so much when people took refreshments with them to the pews once worship started. Even Demers sheds his clerical robes and, when worship begins, takes his seat behind the piano to play with a three-piece group while lay members open the service.

“The congregation made a concerted effort to make sure young people coming are put in places where their voices can be heard,” said Demers. “Their voices need to be heard, and their opinions honored.

“We have gotten a lot of awareness about having 20- and 30-years-olds amongst us and have heard from them about wanting to be more involved,” said Schmidt. “We have had conversations about turning the keys over to them … “

“Those of us who wrestled the keys away from the [generation] before us want to be more open …” said Newhart.

“But we respect that we need each other,” said Lundin.

One of the younger members taking a leadership role in the church is Jason Leon. He is part of a small group of 20- and 30-year-olds, a group that ranges in size from 10 to 50 people that meets to study and discuss their faith and their lives.

“It started off as a way for folks to get together and have conversations,” Leon said. “It’s open to everyone, but most who come are people from our church and who worship with us. There have been others from other churches who attend, and we’ve had exciting conversations. No one ever walked away feeling unwelcomed.”

In addition to the young adult study group, which meets on Tuesday evenings, there is a study group that meets once a week in different people’s home.
“It’s a chance to get together, to study together, to be in relationship with each other,” said Newhart.

There is also a knitting group that meets on Tuesday evenings. “People have started to come to church because of this group,” Clausing-Lundin said. “We don’t push, we don’t prosthletize. They just feel welcome.”

There are other study groups and a Saturday night worship service as well, offering many opportunities for people to get involved.

“My original goal to get everyone involved in a small group was foiled,” Demers laughs, “but [eventually], they did it their own way. These groups function as small group classes—and that’s the difference between managing something and letting it happen. The 20- and 30-year-olds have taught me that. I don’t need to manage it. It’s happening. It’s a movement of the spirit, and if it isn’t, it will stop.”

“There’s joy in this place,” said Newhart, “and I don’t see that in a lot of places. Where do I want to spend my time and energy? With joyful people.”

Leon, who admits he had done a “fair amount” of church shopping before coming to Adirondack Community Church. “The minute I walked in, I felt this was where I belonged. The service seemed more dynamic, there was an air of authenticity, of exploring, of going beyond traditional ritual. I wanted to share the journey, to find out the answers together, to ask the question.

“There was a connectedness,” he said.

Lundin agrees. “It is very much sharing God’s love, and having said that, we need to open the doors,” he said.

Demers will be leaving Adirondack Community Church at the end of June to become the pastor of First United Methodist Church in Burlington, Vt. When he first came to the Lake Placid, he said, he came with different expectations, but soon began to recognize that he needed to change his own way of think.

“As I started looking at what I was doing as a pastor, I began asking, ‘is this helping people experience the power of Jesus?’ The first transformation was realizing that I did not come to Lake Placid to [simply maintain a church].”

He expressed his hope during worship that after his 14-and-a-half years as their pastor, the members of the congregation were “more in touch, more in love with God then you were when I came?”

Demers will leave behind a revitalized congregation with strong lay leadership committed to its vision and mission.

“It has been critical for many people that we talk about church and what is working and what isn’t working seven days a week,” said Steve Preston, the current Lay Leader of the church. “It is constantly put before God.”

“Conversations about the church happen everywhere, even the grocery store” said Clausing-Lundin. “In this church you make the decision for Christ, not a denomination.”

“We are a Methodist church, but we strive to be a community,” said Newhart. “When we come to the table, you don’t have to be a member, it doesn’t matter where you come for—you are welcome.”