Once he got to high school, he exchanged his boyhood moniker of Jimmy for the more mature “Jim”. He took some architectural drafting courses with Mr. Gene Manfra and really enjoyed them. Mr. Manfra encouraged him to apply to a number of architectural schools, including the brand new New Jersey School of Architecture (now known as the College of Architecture and Design) at the New Jersey Institute of Technology. After a year of commuting to Newark from his parents’ home in Wayne, NJ, he decided to move to New York City and commute from there. While there, he tried his hand at acting in an Off-Off-Broadway play but decided that it wasn’t for him. He also was growing tired of NJIT so he headed off to foreign lands. (Well, not too foreign – just Canada.) 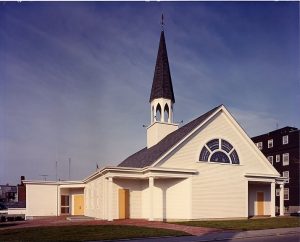 Jim finished his formal education at McGill University in Montréal and graduated with his B. Sc. (Arch) in 1980. He then headed off to what was then one of the hotbeds of architectural design in the US – Boston, MA. After knocking on the door of every architect in that historic city to no avail, he headed up the coast until he found work in Danvers, MA at the office of Robert D. Farley, Architect. It was there that he worked on his very first church project –  Trinity Congregational Church in Gloucester, MA.

Jim pursued a more-or-less traditional career after that, changing jobs and locations a few times, until he was 35 years old. Then, one day, he thought about all the things he liked to do when he was a boy – sing, dance, perform, make music, build models. He was already drawing and making models. So how could he get music and performance in his work life? Well, he could design theaters. But he actually cared more about church than the theater (based on his short stint off-off-Broadway), so he decided to become a Church Architect. He couldn’t imagine a more fulfilling and fun way to make a living.

So, in 1993, with a fourth child on the way, he and his wife decided to go ahead and build an addition to their house and start a new business, leaving the security of a salaried job behind – possibly forever. It’s been twenty years so far and much has been accomplished in those twenty years. Some of those accomplishments are described in this blog. Others are described in a self-published book entitled “Searching for the Sacred“.

To read about Part Three of Jim’s story, click here.