The shape of the new church suggests the influence of agricultural buildings in this part of Upstate New York.

The year was 1999. Our firm had been asked to design a new Catholic church in a suburban area of upstate New York. The pastor of this church was a major catalyst for the new church and was determined that it not be yet another example of what he called “living rooms for worship”. About half way through the design process, his father passed away. The funeral was held in a beautiful old church where this pastor had been raised in the faith. He began his eulogy of his father by talking about this building. In a most poetic fashion, he recalled his first memories of this building—of the ornate pew ends that seemed like castle walls to a small boy; of the magnificent stained glass windows that told so many stories of the saints; of the beautiful sound of the pipe organ echoing through the space. These were his first religious experiences. Year after year he would attend this church, and as he grew older, there was always more to appreciate—the craftsmanship, the paintings, the beauty of sunlight colored by the stained glass and, eventually, the beautiful mystery of the liturgy itself. It became for him a unique and special place, unlike any other with which he would come into contact on a weekly basis. 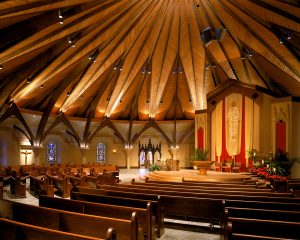 View toward the altar, around which seating fans out through the 16-sided church.

From these words, we began to understand his vision for the new church. It was to be a very special space, a sacred space, where both children and adults could feel God’s presence from the moment they walked into the building. He spoke about a desire to create a Worship Space that would be capable of creating long-lasting memories for the children of his parish while acknowledging the importance of the architectural heritage of the Catholic Church for the older members of the parish. For his part of this creation, he set about securing worthwhile artifacts from closed churches in the diocese, including eleven beautiful Chartres-style stained glass windows. He wanted a space that would bring the mystery back to the liturgy while still serving successfully as a place for contemporary worship. He had asked us to question every part of “traditional” church architecture to see how it served the worship experience and to re-interpret these elements in a manner appropriate for a contemporary congregation. 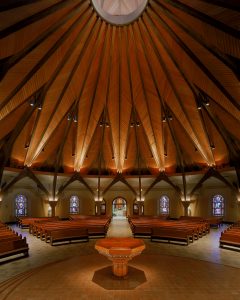 View from behind the altar table shows the influences of Gothic architecture and some of the salvaged stained glass windows.

The incorporation of the artifacts became a driving force in the design—second only to liturgical requirements. It was important that the artifacts look as if they were an inherent part of the building design and not decorative elements that were added later. The salvaged stained glass windows presented the greatest challenge. They were a bit too small for the scale of the 600-seat building and there were only 11 of them. The solution came in the form of a 16-sided building, where the windows were placed at the eleven corners of the building that did not have door openings or were not outside the view of the Worship Space. (Floor Plan) Framed by large columns and pointed arches, each window became a focal point, rather than merely an opening in the wall.

While the windows had come from a small, Romanesque church, the pastor had also gathered many materials from a very large, Gothic church. The windows had driven the plan of the building but the form of the building was directed toward the Gothic to provide an appropriate setting for all the other historic artifacts, such as entry doors, columns, arches and confessional boxes. The feel of a vaulted, Gothic ceiling was achieved through the use of a radial pattern of glulam arches with steeply angled purlins. Some portions of the wood deck remained exposed while other portions were covered with cedar boards installed at angles to increase the multi-dimensional effect of the ceiling. In the baptistery, columns and arches salvaged from an old balcony were transformed into a baldacchino over the baptismal font. The ornate woodwork from the confessional boxes defined the entry to the Reservation Chapel and added architectural interest to the new reredos. Marble carvings and statues from an old high altar found new homes in the Baptistery and in the Worship Space. The old Gothic pulpit was transformed into four separate pieces of liturgical furniture—an altar, a pulpit, a tabernacle setting and a reception table in the Gathering Space. 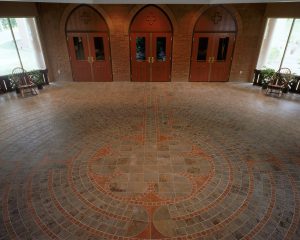 A labyrinth is incorporated into the narthex floor in subtle materials.

It has been over a decade since the dedication of this church. As often happens, the pastor has since changed but most of the parishioners have remained. Many new parishioners have joined the parish, often drawn by the beauty of the church itself. We went back to talk with parishioners to see if what the pastor had set out to accomplish had indeed been accomplished. Following are some of the interesting things we learned from our conversation:

Rather than copying an older style of architecture, the new building incorporated the good from the past (beautiful windows, carving & artwork) without the bad (dark, drafty, sometimes scary buildings with columns that obstruct views), essentially resulting in a church that is “everything you would want a church to be.”

The incorporation of the historical artifacts goes a long way toward creating a space that is “warm, welcoming, comfortable & comforting”, to use the words of the parishioners. The space “inspires reverence” and creates a “sense of the sacred”. Some younger members of the parish have admitted to being able to more easily feel God’s presence due to the sense of awe the space engenders.

Parishioners who had some kind of connection with the churches that provided the artifacts expressed gratitude for the preservation of these important elements of their past and for continuing the values of their parents and grandparents. They see it as a way of passing on their faith. 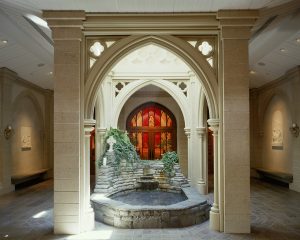 The baptismal font is partly constructed of recycled materials from a balcony.

Within a few years of the dedication of the church, some parishioners put together a beautiful booklet detailing every aspect of the new building, giving its history and its meaning. This has turned out to be a very important tool for helping parishioners—both new and old—gain a better understanding of the building. People have learned more about the building over time and have grown to appreciate it more as well. Both the sixth grade classes and candidates for the Rite of Christian Initiation are given a detailed tour of the church, learning how they are part of something much bigger than their own parish. Seventh graders go on a scavenger hunt, looking for all the little details, so they will gain a deeper knowledge of the place where they worship. Parishioners of all ages have discovered that when people learn about the historical elements in the building, they become more interested and connected to both the building and the community. Even after more than a decade, parishioners are excited to show people the church and tell them the stories behind the artwork and artifacts. Like the building itself, these stories inspire imagination. Liturgists know that a spirit of imagination can enhance the liturgical experience.

On the more theological side, some see the reuse of artifacts from closed churches as part of the resurrection story—death and rebirth to new life. One parishioner who was very opposed to the construction of the new church had this to say after it was completed: “The incorporation of historic artifacts has probably had the biggest impact on my feelings about all of this.  When churches were being closed and torn down, I had a terrible problem with building such a large, new church.  With the incorporation of the older stuff, it (to me) felt like the old was being continued in the new…it was exceptionally powerful, and continues to be.  I feel like those older churches were not lost, but continued on – just in Guilderland!”

There is one thing that is very different in the reuse of these historic artifacts than the way they were originally incorporated into their buildings—they are much more accessible. All of the stained glass windows are located close to the floor so that the scenes depicted are at eye level for both children and adults. Full scale statues that once topped off a high, marble reredos are now placed directly on the floor, behind the pews, where they become part of the assembly rather than focal points competing with the liturgical action. Ornate woodwork is typically placed where people can touch it and interact with it, rather than simply admiring it from afar.

Using artifacts in all the new spaces was also an important design concept to create harmony and unity throughout the space. The Gathering Space uses old communion railings to create the code-required barriers at floor-to-ceiling glass walls. A central table made from a portion of an old pulpit provides a focal point in the room and further indication of what lies beyond. The baptistery is a unique space between the Gathering Space and the Worship Space. Just under 1,000 square feet, it features a setting for the baptismal font created from parts of an old balcony. The walls of the room are sympathetic with these older elements while still being clearly modern materials (ground face concrete blocks). Marble panels from an old altar set into the walls tell the story of Christ’s life and death. Bluestone benches encourage meditation on the artwork during quiet times, creating an intimate space for both private meditation and greeting the family and the casket at funeral liturgies. As people move through the building, each space becomes architecturally richer and more detailed.

Despite the prolific use of historic artifacts from older churches, the Church of Christ the King is not meant to be a throwback to old forms of architecture. By re-interpreting elements of “traditional” church architecture into a contemporary building, we created a unique blend of the “old world” and the “new world”. The building makes no attempt to mimic the style of any particular period of architecture, but rather is based on principles ranging from those of the early Christian churches to elements of Gothic design. By studying the philosophies behind earlier forms of architecture, we feel we were able to recreate the spirit which they embodied so that parishioners and visitors will have a more complete and fulfilling worship experience. Based on feedback from the parishioners over ten years later, it appears that we succeeded in our goal of designing a Worship Space that would be a very special space, a sacred space, where both children and adults could feel God’s presence from the moment they walked into the building. According to these same parishioners, the incorporation of the historic artifacts played a key role in achieving that goal.

Church of the Holy Spirit, Cortlandt Manor, NY
Stations of the Cross